Currently this is a placeholder.
Asked out the other members and teams in the Kinza region to bundle devlogs for the region in one threat.

Initial talks and coordination in how to develope the region is happening in the UFO discord, in private chats, the planet channels but also using the ingame chat or forum.

As the settling of the region is not the same as it would be at game reset, theoretical all ressources are already available. The limiting factor in the challange is the distance and still not available suitable ships.

So in a first step a waystation on XD-354b, a non faction planet, was created.
A new buildt warehouse in combination with a (new buildt) local market, thanks to the changes to the game a few weeks earlier, now allows any player to use the waystation to deliver or exchange goods or to simply refuel.

As of today the long established cooperation headquarter of mine got company.
We still lack the competition info screen as mentioned here, so it took some manual counting…

Currently 5 companies settled on LG-418b and generously donated a local market to enable shipping contracts (with no fee) from Kinza to all destinations and local trade and exchange. 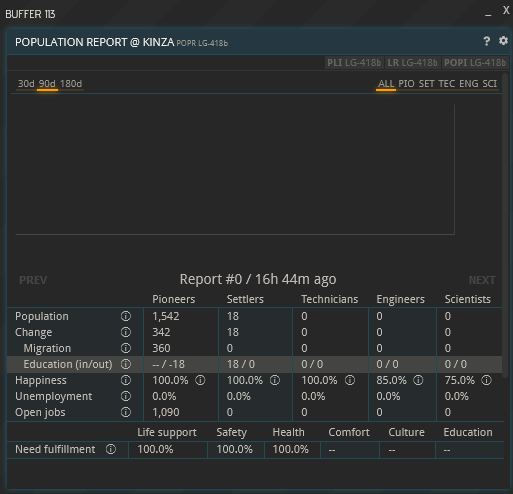 01.11.2021 - Energy
While the world is talking about energy crisis I got word, that there is allmost 10.000 of FF available for the developement of sectors LG, IC and EZ.

They had been delivered to the waypoint (PLI XD-354b ) and from there can has beend distributed to Kinza (PLI - LG-418a) and can be used and exchanged for the settlement of the region.
There is quiete some trading activity on the Local markets of Kinza and the waypoint. 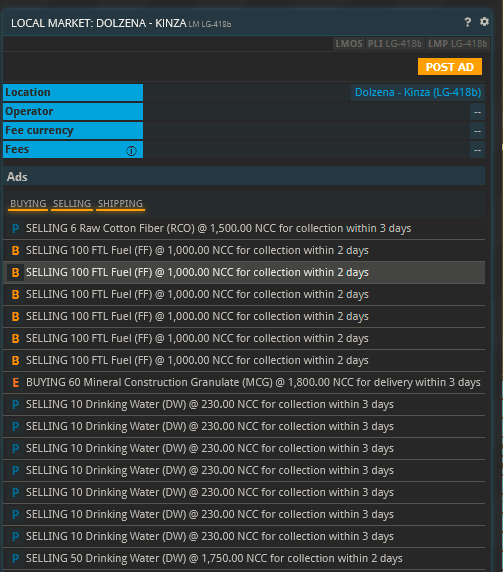 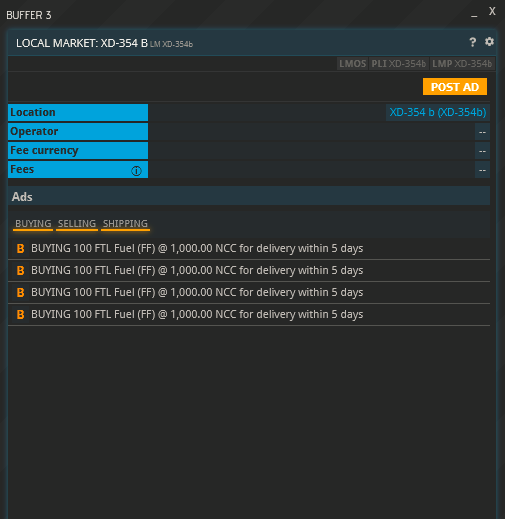 Talking about fuel we should also talk about Nova Unalaska (PLI EZ-476b).
This planet full of ressources has recently been settled. Rumors talk about a base with the purpose of producing Fuel had been established.

The 250 settlers (I know 247 are pioneers) will soon be joined by others as
bases in the sector providing the input for fuel production are in sight. Hands and workforce are lacking once the production is scaled high and higher. 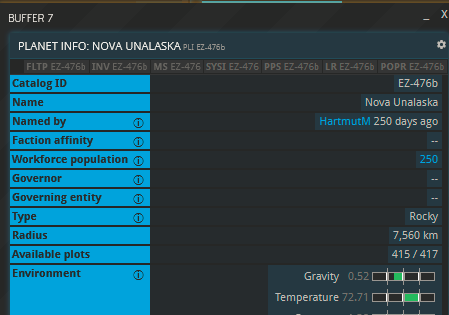 With sector LG and EZ have started activity and production also sector IC as the connection between the two will come to some meaning and activity soon.

Today while having a look to the forum I feelt it had to be those guys. 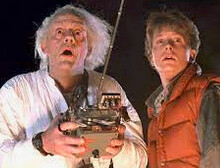 They are distributing name rights and thus have to know who will get them in future.
What a setback:
While Kinza and Nova Unalaska are growing and many companies work on making the LG, IC and EZ sector prosperious it shall all be already decided ?

Are those sectors to far away for competition? I mean sending my ship feels like that first car of my parents at hight speed. It feels fast but in reality its slow.
While I bring in another wave of Fabs I learned, that contributing to planetary infrastructure need a base. Its a small setback, as the Stabilized Technetium to produce Hardened Structural Elements for IC-162a was bought on a 4 CX tour.

I belive the things that seems to be setbacks are just points to motivate the struggle more.

Meanwhile the companies and players working on developing the region even work closer together. They have established an (google) sheet with all settled and to be settled planets.

@kerfy brought a lot of Fabs to Kinza as well, donated “by one of the guys”.
The population infrastructur of Kinza will be extendet by a safety station soon.
I myself have (asap as my ship arrives) enough material for another base on Kinza and a Warehouse + local market on IC-162a.
That central planet will be one of the next to be settled. Also XS-538c is on the “to be settled soon” list.

In nearby future rich sources of LST, SIO and N will be available through that.
A lot of work for the pioneers and other workforce in the sector. Wortking hard will need a coffee break from time to time.

Trading on the (mentioned above) 4 CX tour exchanged SCR and agri products from JS-299a on Antares versus PE, that with an offset was sold on Hortus. Together with long stuck products from those exchanges came enough Iodine to Mor and the XH-594 sector, that the next shippment the materials for Hydroponic Farms will go to Kinza. Reverting and processing of those materials will again involve other companies and players.

With Coffee on hand the developement of the sectors will only speed up.

I received words that at least the following companies are working on developing the sectors and have already settled or build there: The list will surely grow during the next weeks.

Is your company missing ? We have food, we have shelter, we need workforce and will be offering even luxury in close future ! So its your chance to contribute and profit!

While already a bit long the end of this entry should be spoken by numbers: 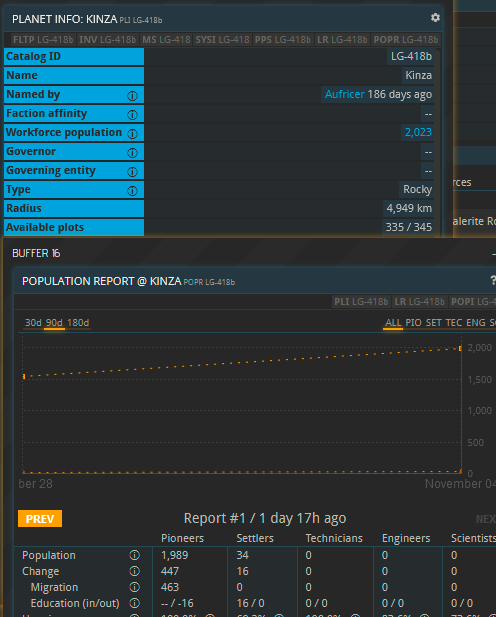 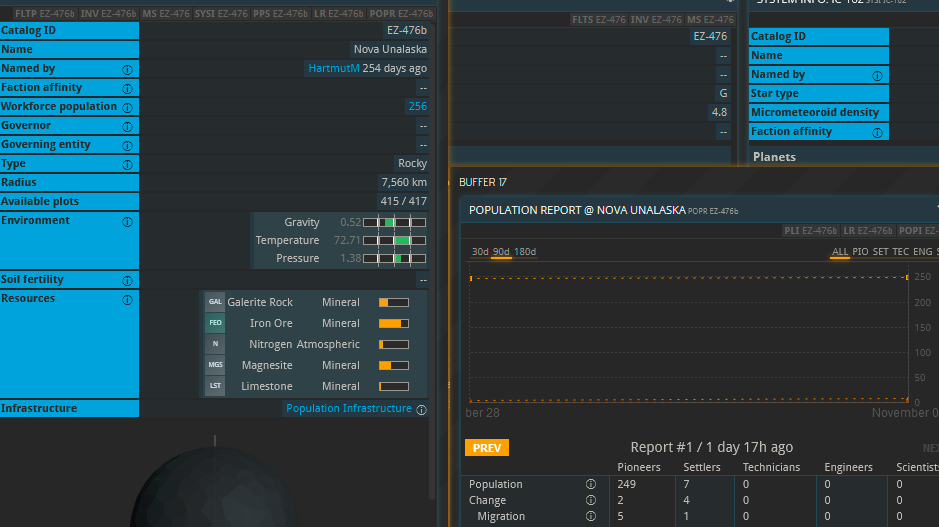 Recent days had been full with growth and expansion plans.
Collaboration between the 3 groups settling that sector become even closer.
We have established a google sheet that is listing the participants and planets that are already settled.
One issue was that we did not know exactly who is involved and what is done. Talking and exchanging in the discord is an important part. The sheet tries to note those parts down and would be a good starting point for companies that are still interessted in expanding to the LG/IC/EC sector or around.
The sheet also contains a basic information about available buildings. But dont do the mistake I did. Mention of “RIG” dont give you the exact number. So I have learned that there is (at least) a company on Kinza, that is running the impressive number of 20 RIGs at the moment.

We have so many companies and factories on LG-418b, that this sign had been spotted.

It seems we are lacking the helping hand of more then 1.000 pioneers - just this week. - 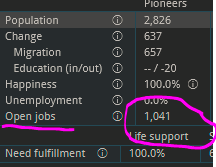 What else happened this week:

There is discussion and talks about how and where to get some still missing materials from. Discussions involve planets outside the LG/IC/EZ sector. NH and FA had been mentioned but also IC-530a.
However those planets will provide ALO, HE3 and other material that is not or rarely available in the contest region. Also plans for establishing production of electronics could be heared. As soon as things are solid you will be informed !

And what is about the promissed Coffee ? In less then 48h the HSE to settle IC-162a is ready. At the same time the materials for HYF will be. All together will be in transit to LG-418b soon afterwards.

Overview of all relevant planets:
LG-418b 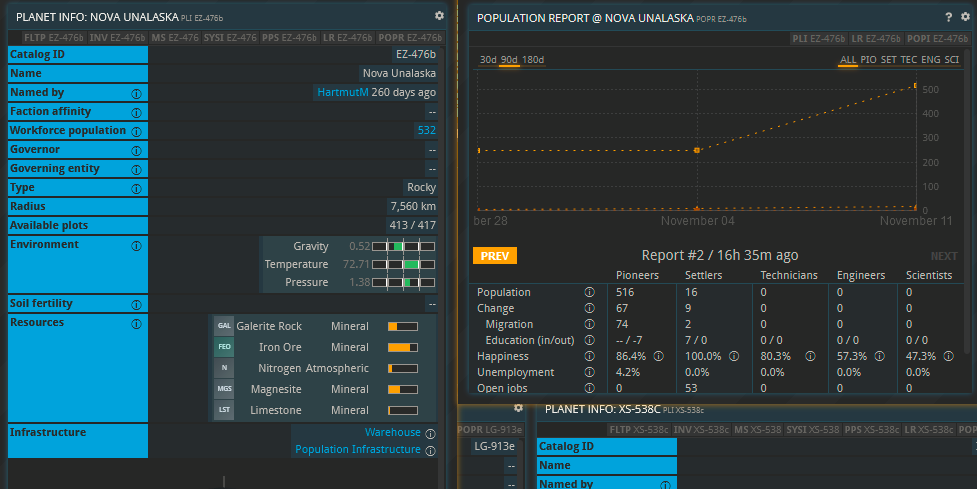 As someone said in the official prosperous universe discord: “The region is a bit of a mess, but all the teams work together despite having differing priorities”.
Thanks to the maker(s) of the freemap. Have a look at how far far away the region is:

And here again in more detail: 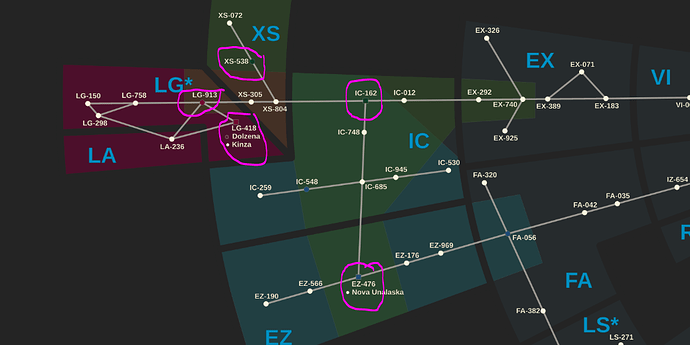 grafik1039×521 106 KB
The encircled (kind of circle, I know) systems are ones which have already been settled.
With Kinza currently being the most developed planet, but also the one that is constantly lacking workforce.

Yes, there are still more than 1.000 open pioneer positions, and settlers are also in demand. In fact, even the second settled planet in System LG-418 is lacking pioneers. Maybe companies are stealing the workforce from each other? But also the other main planet of the region (Nova Unalaska) is lacking a combined (allmost) 100 pioneers and settlers of workforce.

Despite efficiency - due to lack of workforce - being down to 34% and below, the local markets of Kinza and Nova Unalaska are heavily used and full of products.
The Discord channels for Kinza and Nova Unalaska are used for cooperation and talks about prices, logistics, etc. There we’ve learned that some companies are starting to use the region to feed their inner core subsidies, and free up space on those bases in order to restructure (for more profit of course).

Since the last entry to the devlog, the following major events have occured:

GTU has planted even more bases in the region, and with @GoalieHoff we have one or maybe two shippers touring between Moria CX, Kinza and Nova Unalaska. The service is in need and asked for frequently.

Shippers have planned and are also willing to connect to the Hortus region using the newly settled planet LS-227g. That nice planet is a bit distant to the region, but could be the main source for HE3. There is a company planning to connect LS-227g with a base on Nova Unalaska dedicated to FF and SF production.

It will also function as a second waystation to the region (currently XD-354b is the waystation for the MOR region), so it may be receiving a warehouse and local market as well.

We got EZ-486e and XS-538c settled, both planets provide a good amount of Limestone, and could bring a price crash of that commodity. Limestone production on XS-538c is not even at full scale due to (again) a lack of available workforce.

With more bases established and bases expanded COFFEE production on Kinza has finally begun.
You could say that it’s almost 100% locally made. A Chemical plant is producing the NS that with Water and drinking water from Kinza is brewed into COF. *1

*1 Some buildings will be delayed until shortly before the next wave of workforce arrives. For the same reason the population infrastructure is delayed, despite the fact that the material is already available.
It makes no sense to subsidize and use resources for a workforce that has just not yet arrived.

With IC-162a, settled and accompanied by a local market and warehouse, there is not only Nitrogen (for NS production) and Silicon ore (for MCG and a planned glass factory on Kinza) available, but also the logistical center of the region is ready to open markets for everyone.

To sum it up, before the usual planet overview.

Overview of all relevant planets:
LG-418b 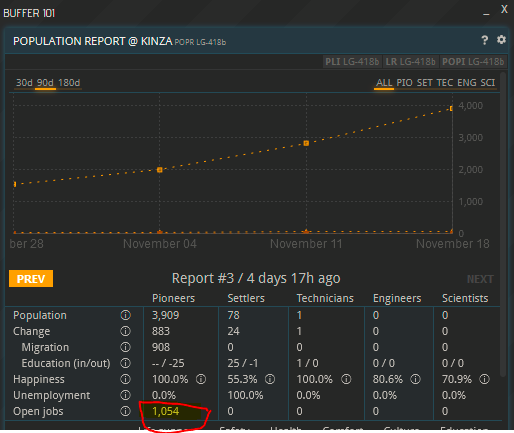 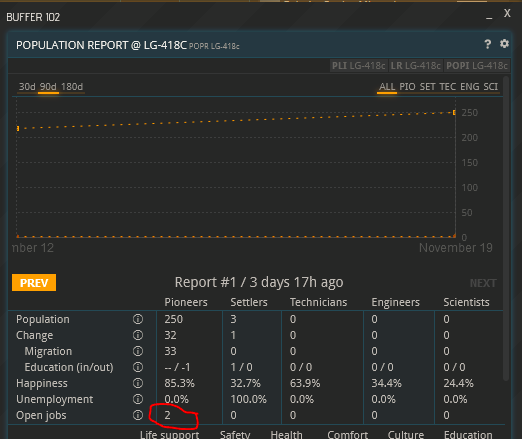 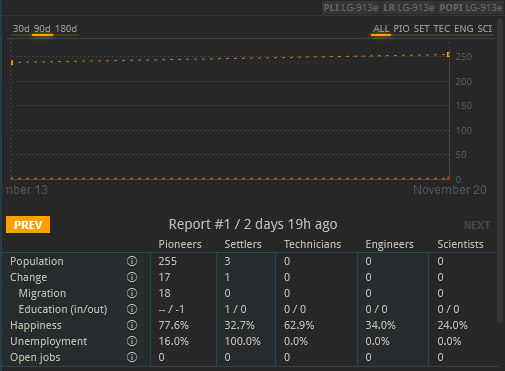 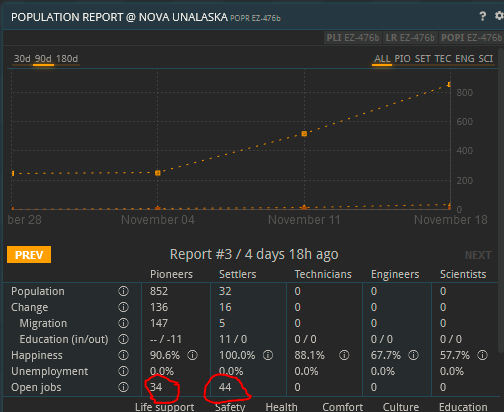 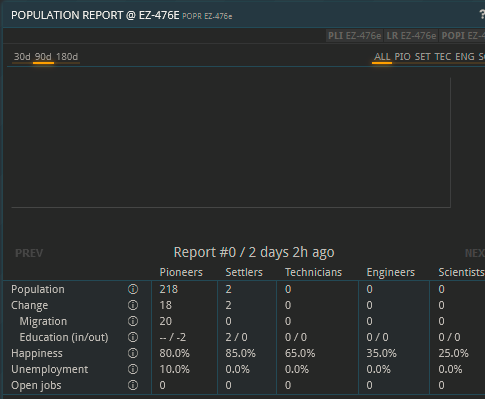 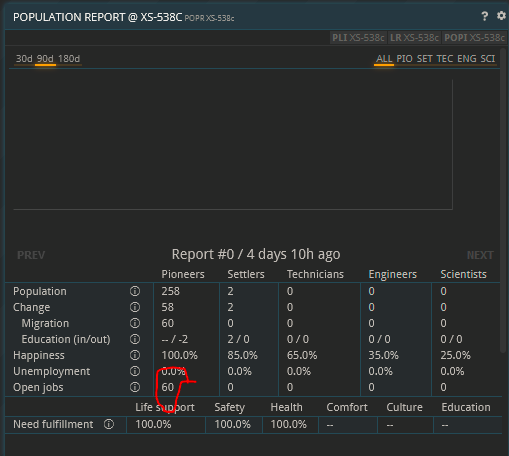 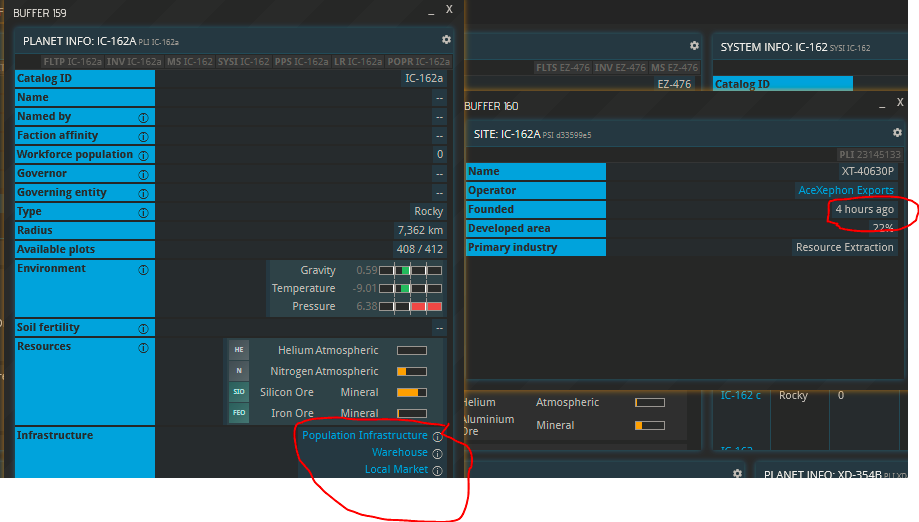 Thanks to the maker(s) of the freemap.

Its just me, thanks.

If you require these resources, reach out to me on the UFO discord or through COM. I am very reasonable with prices.