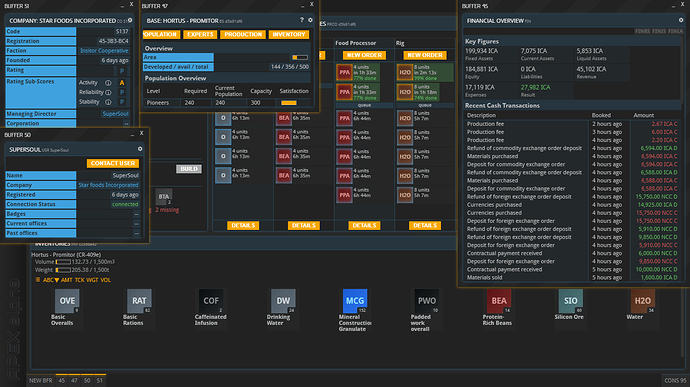 Today, I made a buttload of currency by shipping other people’s stuff for good currency that is efficient! (and I really would suggest that people stop trying to rip new players off by making the shipping reward a thousand currency for every type of currency. not everyone is going to be smart enough to be able to calculate the fuel cost of everything. we are supposed to be helping these kinds of players instead of ripping them off so stop it, or the space alicorn will get you and make you mess up so that you can’t use your spaceships anymore because they are stranded on another planet.

so, after many annoying hours of trying to figure out how to use the foreign exchange, I managed to get enough currency to buy the materials for and then make…

a whole another rig!

I am one step closer to getting my full, amazing, currency making, set up!

and because it’s the end of the first week since I started playing the game, I’m going to put the link to every episode in this one so you don’t even have to go through a bunch of searching if you don’t want too!

[game B1 day2] hello everyone!

I can see you liked my last post a bit and I’m pretty sure I made you laugh a few times so I think it was a success!

I just want to make everyone day everyday in some way so that they have some fun thing to look at in the form to read when they’re working on their base.

without further or do, I present to you all…

and I have an announcement to make…

maybe because it makes you think of the time when the same kind of thing was happening to you too so you laugh because of how silly you were to worry about it in that situation. anyways, I hope I made your day and gave you a laugh with that.

as you can see, I got a little bit of something special today…

I was visited by a magical space alicorn that bought me a pro space license key!

(people who have questioned the magical space alicorn have had their accounts mysteriously, magically deleted for seamlessly no reason at all without…

I was pretty sad that there wasn’t any of you that wanted to have any fun with the last form I created.

I know this is a very serious and complicated game most of the time but sometimes you just got to let your little kid self out in the open sometimes, even if it feels very silly to do so.

I do it all the time! and look at how silly and positive I am! hehe.

so please try to be a little bit less serious here if you can, you don’t have to be a kid to act like one, and even then it’s still okay or should be okay to act like one if you still know what’s at stake when you are doing it.

That’s what I say. hehe.

we all are still playing a game after all. hehe.

see you all tomorrow! and have a good day/night everyone!

(for some reason, people put up foreign currencies that are worth a lot more than everything else and it gives you a little bit extra on top of that of that currency after you put it through the foreign exchange.

(I honestly think it’s some kind of secret system for the higher level players to have more trustworthy and smart people take their contract while putting it on the lowest level requirement so that they can get it done faster.)

(I honestly think it’s very clever and smart, but I still don’t like it and I would much rather there be better tutorials for new players instead.)

(I honestly don’t know, what do you guys and girls think about it?)

(do you guys and girls have any idea if I’m right or not about it?)