There have been many disparate conversations and false-starts as relates to ship trading, I’d like to use this topic to collect and refine the ideas, features, and changes that already benefit a thriving spaceship sales economy, as well as those that are still needed.
Also, buckle up because this is sorta opening Pandora’s box and there is no TL;DR.

– The Automotive Comparison –
This was it’s own section, but it got so long I think it needs to be optional reading for those who like context. So see The Appendix at the end of this post if you want. 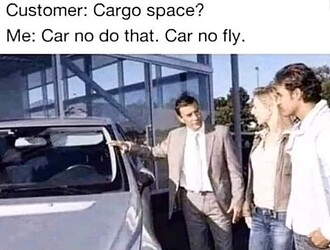 Below is a list of topics related to the ship trade that have been broached in the past. It is by no means a comprehensive list and I welcome any additions in the comments below.

Feedback ramble and some ideas to improve gameplay - #7 by Ficks_Dinkum

Feedback ramble and some ideas to improve gameplay - #8 by Ficks_Dinkum

Ships, and the lack of texture between technicians and scientists

From my reading, I think the things that are generally agreed upon as good ideas ( I also don’t consider this list comprehensive.)

As relates to ships:

As relates to space and trade:

I generally agree with everything in the above section as needed. From there my recommendations are:

As relates to ships:

Feature Request: Forum Badge for anyone who read this whole damn thing.

Thank you very much for reading what ever percentage you got through! Whether you need a spaceship, a cow, or any vaguely legal combination of the two, head on down to Luceria Mersail’s Spaceship Ranch! 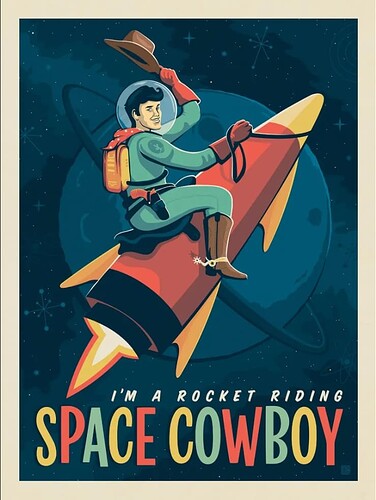 Quick Disclaimer: I work in the automotive industry and have a pretty good perspective/experience with the general industry, but over a decade of first-hand experience at dealerships as well as grew up around them, shoutout to my fellow PrUn auto brothers/sisters. I have my biases and have just declared any potential conflicts of interest. However, I am by no means an automotive sycophant, nor do I worship at the altar of Oil (LFTR Breeders FTW). I am also not equipped to directly/immediately benefit from ship trading.

What we know is that the major OEMs do not have the ability to sell their own product directly to the public at scale. Now, many vehicle startups are publicly fighting this notion, namely Tesla. And I’m very interested in seeing how and where they succeed/fail, as well as what the future holds for private vehicle ownership in general. But for the near future at least, they are ‘new’ and ‘small’ enough to disregard as a parallel venture in a different industry. Before you kill me, Tesla is not new or small, but they output almost 1mil vehicles in 2021 globally, with a hefty political tailwind at home and Iron Man at the helm. Compare that to a single OEM, Ford, with a single quarter record for 2021, in the US alone, in the midst of a gruesome inventory shortage, in the era of some of the weakest sales staff skillsets in American history, in an industry that lags 10 years at least behind any other, with disheartening training standards and employee turnover rates, horribly bungled product releases, run by committee and crusty management paradigms, with a significant political headwind at home, output .5mil vehicles. Once Tesla’s output reaches OEM levels, which is coming I think, we can do direct Apple to Apple comparisons about performance from a customer perspective. Just can’t do anything opinion or satisfaction based because fanboying is a thing for all brands.

So how do we know? They volunteered for the dealership model and have tried to put the genie back in the bottle several times across the years, yet dealerships remain. While there wasn’t always tension between dealerships and OEMs, it crept in startlingly quickly for a business model that every party involved (OEM, Dealer, Public) agreed worked better than the direct to public model (This tension was present even before comms and computer tech made d2p a possibility [again, it did start out possible, but the industry rapidly grew past what technology could support in d2p]). Tesla’s desire to exclude dealerships is an obvious profit-seeking decision in this way. One that many OEMs might take themselves if they could restart today. So what problems does the dealership model solve that keeps the OEMs from returning to a direct to public model?

I am aware that the political dealership lobby is incredibly powerful and fights like a caged animal anytime they sniff out an OEM moving certain pieces into place. But, that lobby is not powerful enough to prop up the entire industry
without some help from OEMs and the public.

Essentially the problem OEMs have today is that they are at heart a manufacturing/engineering/logistics company. They make cars and they need to sell them, they deal in supply lines, factories, material strengths, production throughput. With that skillset, it’s no surprise they can expand to logisitical/financial accounting businesses like offering their own auto loans with some level of ease and success. But their contact with the public compared to the size of the business is limited even in these tangents, and generally one-way. The public is only able to meaningfully reach an OEM indirectly and collectively.

When an OEM dips their toe into retail sales, they are forced to deal in people and the public.

I do not hate people or consumers, this is just a list of some of the considerations and contradictions that must be taken into account when selling to the public. Contrast that list with how an OEM handles a dealership ordering 10 cars a week for 10 years like clockwork, with deep knowledge of the OEM vehicle ordering system to get what they need with minimal mistakes because inventory mistakes are some of the most costly at a dealership and a sell-or-die fuse baked into their financial statements. It just takes less from the OEM, and all the dealership needs from the OEM is strong throughput and strong branding, everything else can fall apart between these two and everybody will still move metal.

Compound this with learning the very specific subset of the public in a given area, and catering to their specific needs. Along with the laundry list of supportive departments departments that keep a dealership running. They are out of every one of their areas of expertise and spread too thin to boot.

From the OEMs perspective, much better to sell their vehicles in big batches to these businesspeople. Let them sort out the mess from there and just step in to protect the brand where necessary.

(One last funny for those who read the Appendix) 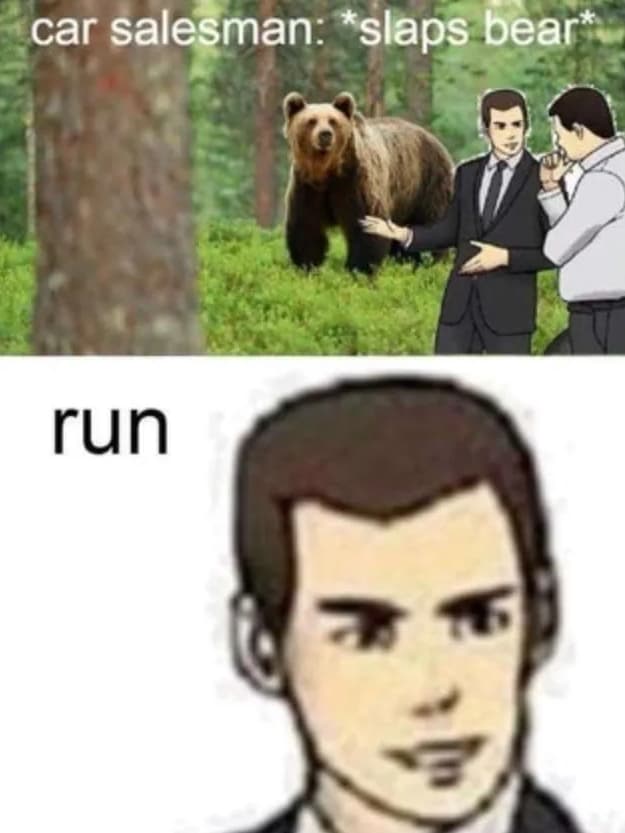 Comprehensive post
Many important points made.
Too long; didn’t read.

Discord - A New Way to Chat with Friends & Communities

Discord is the easiest way to communicate over voice, video, and text. Chat, hang out, and stay close with your friends and communities.

Hi there! I saw that there was brief mention of implementing an exploration mechanic next universe, and totally understand if things are already pretty baked, but here were some of my thoughts on a possible scheme regarding exploration. Exploration if done right is a huge draw to a big portion of the gamerbase (a lot of 4X people love the exploration phase most), so I’m proposing my framework (threw in initial numbers which I’m sure will change) and would love further discussion. All white s…

How do you make such amazing well built posts. I seriously wonder whether you work as a entrepreneur or corporate presenter. (Welp I clearly didn’t read it cause I found out your car salesmanship) Thank you for yours ideas and their amazing depth of exploration. If I’m being honest TLDR because I am very lazy and am inspired by your dedication and creativity. If Simulogics wasn’t a indie studio and had some triple A MMO money (haha that went well for Starbase (I am utterly devastated regarding what happened to that game and community and it’s a reason I don’t trust humanity) ;-( ) you would be hired as a designer!

Exception number 1 (Major): Patenting doesn’t make sense since there is no inventive act associated with creating a configuration of a fixed set of permutable selections. Consider - would you want to have to pay corporations because you happened to use the same base layout they did? That’s what this would do, and I don’t see it adding anything to the game. Especially given there are likely only a few “useful” configurations.

Exception number 2 (Moderate): I don’t see an immediate gameplay benefit in adding more configurations for FTL range, etc. What would the purpose be? Would it just create more churn for the sake of churn? Would it just be something that systematically favors the well-capitalized over the not-yet-well-capitalized? That is - does it solve a logistics problem that exists, or does it just create more “options”? That said - I rank this only a moderate exception, because there’s a good argument that there is already a lot of complexity just for complexity’s sake. So without knowing what the developers’ intent is here, it’s hard to say. Consider that right now there are … uh… if my math is right, almost 1.4 million unique ship configurations even with just the options we have today. This is not something you’d want to have to view in the current implementation of the CX; you’d instead want some way to search for your features. (My guess is this is why ships aren’t yet traded on the CX, but just their kits, again if my math is right, there are only 37 unique commodities to make the ~1.4M configurations).

I do like the idea of being able to dismantle / salvage ships and I like the idea of being able to trade ships - if a good way to search for them is implemented (should be feasible, you can filter on pick “must match”, “ranges” or “don’t care” for particular components). I can see an opportunity for “dealerships” where you can buy branded ships, instead of just having to sell them on the CX. But the rest… feels like noise.