Just an idea to overcome the problem with people wanting multiple-item shipping contracts.

Shipping containers would be an inventory that would look like a commodity.

They could be manufactured from Steel in a welding plant in maybe 3 different sizes (in terms of cargo tonnage) but when made, would act like a mobile inventory.

You could drag between the shipping container and your inventory to load/unload the container.

Hopefully, as this uses existing programming elements, it shouldn’t be too costly for the Devs to implement.

Also, it would be kind of fun as it’s a bit like the real world!

I used to play a game called “Space Bucks” where you had different sized ships with different cargo hold configurations, etc. You also had a set of factions (Alien races) and each faction had a specific supply and a specific demand. The containers were also of different types: solids, liquids, gases, livestock, etc.

So, the whole shipping container concept has an abundance of possibilities that truly need to be explored and discussed further.

SO this is actually something I just asked about in the Discord.
I too would like this feature, below is something like what I would envisage!
It isn’t just useful for selling groups of items together (a ship upgrade kit for example) but also would help organise an inventory.

Side note: this is also something that Eve Online has. 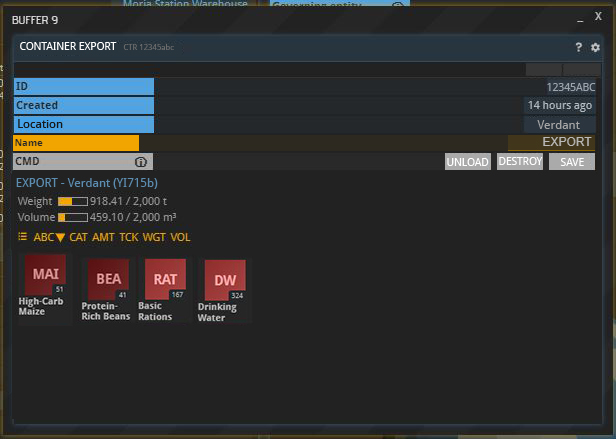