I appreciate the effort the “Devoids” put in their participation offer.

Thus I am saying I am planning since a long time to settle in the outer rim of the known universe, a CX would be of great need. I have used the contest announcement to do some more research in how to develop a specific regin. If you are in for a challenge here it is: 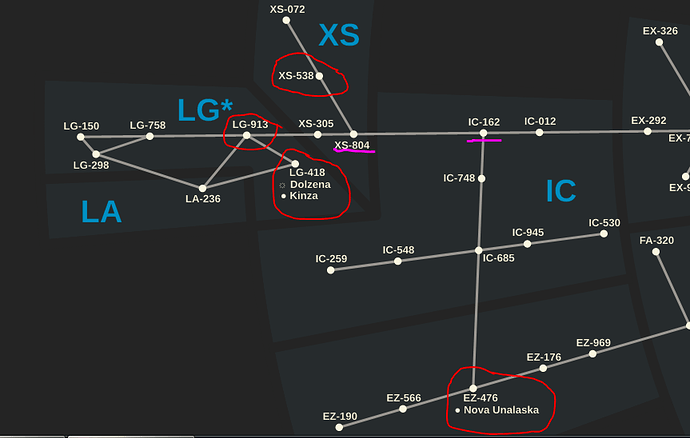 LG-418b is a very fertile planet. And the only fertile in parsecs. Obviously as I have named the planet long ago it is my plan to colonize that very planet. “Kinza” is a berberian word meaning something like (valuable) treasure. Its unfortunately 4 jumps away from the focus system, but mainly for having the second focused planet in range.

EZ-476b is the second and last (in that list) T1 planet. Rich of ressources. Combined with the food from LG-418b it should be possible, but still hard to start a running region.

XS-538c provides one of the most basic ressources Limestone. I am sure it should be settled and would prosper.

LG-913e similiar to XS-538c its a planet that provides needed and commonly used ressources “Hydrogen” and “Helium”.

IC-162a a compromise planet, its in the focus system and it has some needfull ressources within.

Faction of the Outcast (FOO). We would like to establish our currency: Outcast dirty cash (ODC)

Only outcasts, currently just me @Aufricer and my Coorperation (Aufricers Kramladen A1) . If you check you will find its headquarter on LG-418b since a long time.
I cant promiss other players anything but I will sooner or later settle LG-418b. I have the electronics for the HQ already scrounged up. if you are interessted contact me.

It is an interessting challenge to try to establish an CX + faction that far away. The region is hard to settle. Only 1 fertile planet, only 4 or 5 T1 planets, 2 of them without any reasonable ressources.
After doing a quick (not so) check I would say: A lot of SEA (Poly-Sulfite Sealant) will be needed and the ressources to produce it are missing as well. I also could not found Gold (AUO) or Halite Crystals (HAL) any close. Trading those and other ressources in would be necessary.
Most of the other ressources are around (less then 7 jumps) on planets/Systems (including) the following

Adding a CX in that region would be also a good step for expanding the universe (sector LA?) or adding a new ressource needed and only available in the region.

I looked at this region when the game started and thought it was a great target as well. Good luck on your project and thanks for the mention!

@molp just mentioned in the main post, that only established factions are allowed. Thought I had read it different in Discord.

In case, that region wins a CX, we will then decide what faction it should belong too. For me CIS or NCC probably but maybe we can still bribe the devs for FOO with ODC money

Thanks for the first company, trying to support the struggle.

I would like to encourage all players but especially those that maybe want to start their second base there. It should be no problem if your company is < 50 days old.

If you are tempted by settling far away, then come in contact and help us make a stable economy there.

Can you please make a decision for either one? The rules state that you have to decide during registration.

LG-418b is four jumps away from focus system.

At least you have read what I have said myself above

LG-418b is a very fertile planet. And the only fertile in parsecs. Obviously as I have named the planet long ago it is my plan to colonize that very planet. “Kinza” is a berberian word meaning something like (valuable) treasure. Its unfortunately 4 jumps away from the focus system, but mainly for having the second focused planet in range.

I am sure if the guidlines of the community event would be hardly violated they will inform.

Focus planets: The registration should entail a few planets that will be part of the endeavor. The planets should be close (think up to three jumps) to the focus system, but outliers (like gas station planets on the way towards the focus system) are okay as well.

And just in case we will mainly cooperate with the Far Out Project.
I would - as you have read the intro above and I am repeating myself - love to see Kinza and LG-418 developed. Having a CX will be a plus, but in the end it does not count if it is on Kinza, Nova Unalaska or what I believe would be also usefull somewhere in the middle of those two planets.

So again I can just encourage everybody to join the effort of either this application, the Far Out Project or the Operation Aleuta.

stop busting balls.
They can use any system they want.
What system gets counted for the points later on is decided by the devs.