Silicon: A proposition for fixing the unbalance of the Silicon economy

What follows is a proposition for review and discussion for improving and balancing out the economy of silicon and silicon ore within game.

As the game currently stands, SIO is one of the weakest ores in the game when it comes to mining and selling, mainly because the game has a very strange recipe for turning SIO into SI, and far easier ways to get SI as a whole from other recipes. Researching how Silicon is made in real life has given me some insight into how this could be fixed so that SIO can get back to being a valued resource without losing the value of the other products.

To start off with, the current recipe is 3SIO + 1 AL = 1 SI. This does not make much sense as Quartzite, real life SIO is mostly Silicon Dioxide, and the reaction does not require Aluminum at all. The real life reaction in within a furnace is SiO2 + 2C = SI + 2CO and 2SiC + 2SiO2 = 3SI + 2CO. The reason for the second equation is because at the temperatures needed, some of the Silicon bonds with Carbon. So a more accurate recipe for smelting SI in PrUn terms would be 5SIO + 2C = 4SI, not using Aluminum whatsoever. I realize this is really dumbed down in comparison with the actual science behind it, but I think the point is made.

To purify silicon, it needs to be mixed with gaseous HCl to create gaseous trichlorosilane (HCL3SI), then mixed with gaseous hydrogen at such a high temperature that the gas burns off and only the Silicon atoms remain. This pure silicon is then pumped out in droplets or removed in threads that can then be used to create semiconductors or photvoltaic cells.

So here is my proposition for fixing the Silicon recipes. For starters, eliminate SI and replace it with MSI (Metallurgical Silicon) and PSI (Purified Silicon). Then replace the current recipes as follows:
SIO → MSI: 5SIO + 2C = 4MSI
MSI → PSI: 1MSI + 3CL + 4H = 1PSI (This could also require an AML and not an SME to make.)
TS/ZIR/BER: Replace the output of SI with MSI.
Anything that takes a CLR to make: Replace the input of SI with PSI.
SIO → GL: Change to MSI = GL and MSi + ?FLX = ?GL

Implementing these changes will eliminate the expensive nature of using Aluminum in the smelting process, and make it more available overall. Also the three current other sources of Silicon, TS/ZIR/BER will retain their value as it can be used for midpoint products and alloys for other things such as vehicle parts, and can still be refined into the silicon used in electronics parts. FLX is used to reduce the melting point of metals such as silicon, so adding it to create bulk glass makes a lot of sense and gives FLX more use.

This is of course an open topic for debate and improvement. I used https://hackaday.com/2021/11/15/mining-and-refining-pure-silicon-and-the-incredible-effort-it-takes-to-get-there/ as a source, and I recommend anyone science-minded to read it. I put a lot of thought into this and I hope it will improve the balance of the game greatly, or at least for silicon production.

I like the thought and detail behind this. And adding extra materials and recipes is always good, but I would make the following changes to the proposal:

Firstly, keep the name “SI” for the metallurgical version. This is so that it is consistent with all the other elements in the game. PSI can then be derived from SI as outlined above.

Secondly, don’t make it easier to make SI. I think it’s good from a game balance perspective that SI doesn’t follow the same C based smelting recipe as FE, AL, etc. You could argue that AL isn’t the best ingredient for the SI recipe, but I think it should be something other than (or in addition to) plain C or O, which already get enough use in other smelting recipes.

Also note that it’s not the case that SI is too expensive to make currently - if you look at the CXs there is far more supply than demand. So “cheaper SI” doesn’t seem like a necessary objective.

Thanks for the reply. I realize I didn’t exactly make it clear as to why I’m suggesting the removal of Aluminum as a recipe option. The basic reason is because the cost of Silicon is half to 1/3rd the cost of a single piece of Aluminum, making the recipe of 3SIO + AL = SI not worth the attempt to make it, basically making that recipe useless. The reason for this is because there are three other sources of Silicon in the industry as byproducts from other material refinement. The intent of this suggested change was to make the SIO → SI viable again, while still keeping the value of the other SI source recipes so it wouldn’t ruin their production.

Makes sense. Although in that case I’d say the problem is that SI is obtained too easily as a by-product of other things. So I’d still keep the SIO → SI recipe expensive, but reduce or remove the yield of the other ones. In particular, getting both SI and AL out of BER doesn’t seem logical since AL is needed as an ingredient for SI production in other recipes. ALO and SIO would make more sense as by-products there.

SI is a waste-product at this scale, and personally I am spinning up drone and solar panel production to just get rid of it.

I mean just look at how people are giving it away 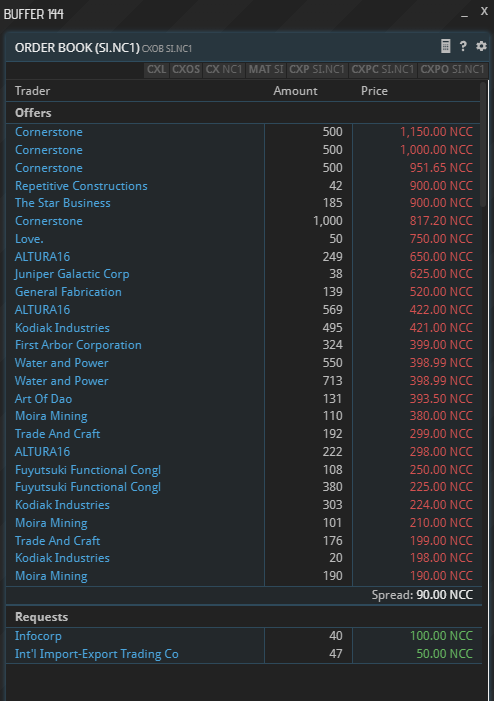 The AL market is able to absorb all of this excess runoff, but the SI market is not. The SI does not have any large-scale consumer, it’s a waste product just like NA.

According to Wikipedia, there is a silicon refining method that uses Aluminium as the reducing agent, so I don’t think the game realism is too much impacted by keeping the AL based recipe. I propose we should keep that, for game balance.

Putting together all of the above posts, I think the final proposal looks like this:

I assigned the PSI purification recipe to the LAB (Tier 3) instead of the AML (Tier 4), because the CLR is Tier 3. Therefore, locking all the chip recipes behind Tier 4 doesn’t seem like a good idea, but I haven’t really thought about it very hard. Given that we want to promote higher tier production in general, maybe it would actually be fine to have PSI depend on the AML instead.

I kind of like how there are just a few recipes that have multiple outputs- generally these are at the higher tier, which I think is a good decision. Having “waste-products” is an interesting mechanic to add later into the game, and gives players with AMLs an opportunity to find something useful to do with an extra output- which is not typically how you make decisions in PrUn. I run BER → BE in AMLs with SI as something of a waste product for me. It actually got me into the CTF → LFE chain.

I think if waste products begin becoming a large scale problem, MM materials that heavily use them could be introduced as a way someone can get at least a lower guaranteed value out of them.

That might be helpful in the case of NA. (I think SI has useful outputs generally, including MM uses.)

Turns out, in real life, NA is actually an ingredient in glass production! The glass we have in our windows and tableware is called “soda-lime glass”.

This would be pretty neat to include in PrUn, since currently NA doesn’t have much use. Also after researching this a bit, I realised that glass production uses SIO rather than SI, so the original SIO recipe was more accurate.

So, my proposed more realistic replacement for the above glass furnace recipes looks like this:

Note that NA is currently dirt cheap, and I don’t think the cost of SIO is a major input into the GL price, so this change won’t affect the glass economy much, but it will give players something more to do with their excess NA instead of just selling it to the MM.

Thank you for the feedback everyone, very good input! We’ll look into making changes for the next release.