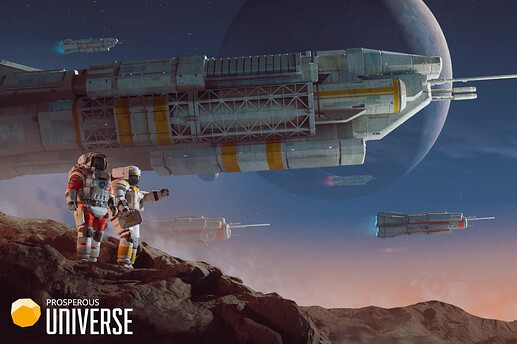 The APEX update will be released on December 6th, 2022 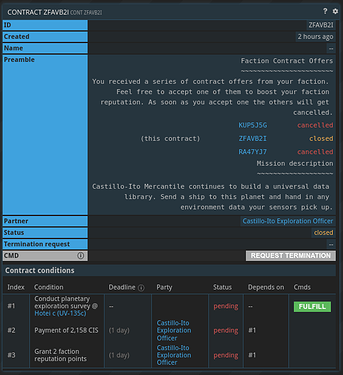 Faction contracts are the newest addition to the contract system. Your faction will send you three contract offers to choose from every now and then. Contracts will be randomized and range from simple shipping contracts up to contracts where your faction rewards you for becoming governor of a planet. If you don’t like the contract offers you get, you can decline them and wait for ones that suit you better.

The different contract types do not drop at the same rate, there are common, uncommon and rare ones. The rarer the higher the reward. Faction contracts have three reward types: currency, materials and faction reputation. The faction reputation will influence the currency and material rewards and may become a part in future systems.

Faction contracts can be accepted independent of license status, so they will open up a new way of earning money during the early game. 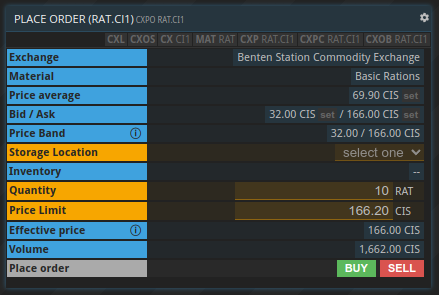 Prices entered when creating orders on commodity exchanges are now converted into an “effective price” that is shown right below the price you put in. The effective price is the one that will actually be posted with the order and is always rounded o 3 significant figures. This means for prices above 10 the minimum increment is 0.1, for prices above 100 the minimum increment is 1, and so on.

My lobbing was a success!

Also, “Volume” isn’t the most intuitive name for that field. If you’re in there making changes, I suggest “Total” instead.

Volumes in the markets are now represented by the number of dollars that have changed hands, rather than the quantity of units. The industry term for this is “base, quote”.

A while back volume was changed to represent the quote, showing us how much $$$ is traded in a candle. I personally don’t like this change. However, the current CXPO screen is consistent with how volume is used everywhere else currently. I also agree with you, total would make more sense.

Question for the experts (dont have Fio on my phone).

If glass needs NA that means a Chemical plant ( Bfab and Truss) is needed. Without glass no LTA and no HB3 is possible.

Is it possible to have HAL and Helium without LTA ?

Is it possible to have HAL and Helium without LTA ?

This is a good catch. The problem actually isn’t with HB3.

As far as I can find, there is no starter planet that has any deposit of HAL.

It must exist on a starter planet because without it, we will be unable to produce any LTA, and thus settle any new planets if\when the universe is ever reset.

Easy solution though. Add a very small HAL deposit to one of the starter worlds. Suggest adding a non-economic quantity that’s enough to kickstart the economy.

As far as I can find, there is no starter planet that has any deposit of HAL.

Incidentally, Promitor has that small deposit of HAL.

Why didn’t it come up on the search then…

Incidentally, Promitor has that small deposit of HAL.

Likely the minimum extraction rate was set to above +18% which would exclude Promitor.

You also only need one savvy player to use their CMK to start on a T1.5 world and HAL can flow

But as I see there is some HAL available (this universe).

But in general it will make HAL even more important.

Lets see how it plays out.

Will the BOS recipe stay the same? It was neat that you could use the AL and SI from BE to produce BOS on the same base without importing AL and SI.

Will the BOS recipe stay the same? It was neat that you could use the AL and SI from BE to produce BOS on the same base without importing AL and SI.

Yes, at least for now.

With this change of SI production, can you maybe add some more SI recipes?
A Quick look at wikipedia (jay) shows that SI can also be made from SIO + C

It also mentiones use of NA.

Please give us an additional recipe besides SIO + AL.
Thank you

Additionally, do you think we could have the exact recipe changes? Are they finalized yet? So that we can start planning & adjusting. Thanks!

Please give us an additional recipe besides SIO + AL.

Good call! Will add another option using C / O (and optionally FLX) to the update.

Additionally, do you think we could have the exact recipe changes?

Most of it should be in the notes already. I can screenshot the exact runtimes when everything’s deployed on staging.

The faction reputation is being shown in the CO command. 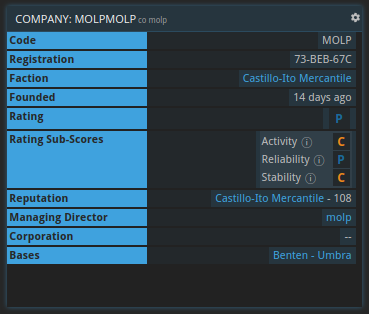 you can’t do anything with the faction reputation points

That’s right, at the moment there is nothing you could actively use them for, but they do impact the amount and height of future faction contract rewards.