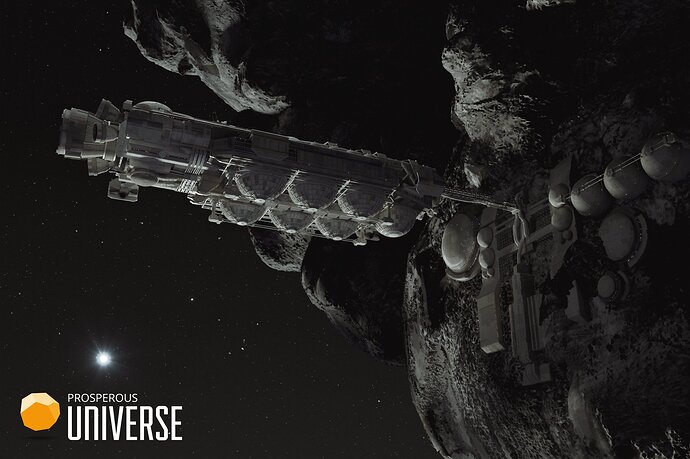 The Convergence release will be released on Wednesday August 3rd.

Convergence will bring you the first iteration of custom contracts and the long awaited ship upgrades! We also renamed the TRIAL license to FREE!

There’s a new section in the shipyards where you can select not one, but two blueprints to start a ship upgrade project. This means you don’t have to collect all the materials to build a full ship anymore, but can gradually enhance your ships.

The cost for upgrading will be the difference between blueprints. Also, you need to select a ship (that’s present at the shipyard) matching the origin blueprint in the project’s SHYP command before starting the upgrade. The ship also needs to be empty (inventory and fuel tanks).

Note: While a ship is being upgraded, its stores are locked and it can’t start a flight.

To create shipyard projects, a PRO license is necessary. More information on ship upgrades can be found in the handbook.

The first iteration of custom contracts allows to create contract drafts from three contract templates. The templates are very similar to the BUY, SELL and SHIPMENT ads that can be found on the local markets. 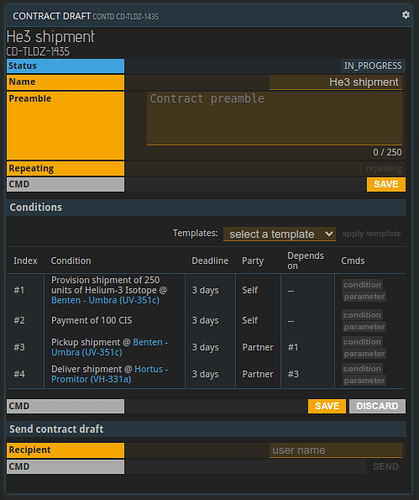 A contract draft can be send to any licensee for review without going through a local market. The other party can then close or reject the contract. Once it is closed, the contract works exactly as any other contract.

To send contracts to other licencees a PRO license is necessary, closing a contract requires BASIC or PRO. More information on custom contracts can be found in the handbook.

Sometimes two partners want to terminate a contract immediately, because the reasons for the contract or its conditions became irrelevant. This has only be possible in the past as long as no condition has been (partly) fulfilled. In that case the contract just got canceled after the deadline ran out. In any other case the contract got breached and one party received a hit on their rating.

I think the private contracts are definitely a much needed end-game feature for end game players. Very good move. So is the ship upgrades. 2/2 nice job folks.

Is one of the contract templates for an escrow contract, which puts the items from both sides in escrow and then releases them, securely?

No, the three templates are BUY, SELL, SHIP. This is the first iteration of custom contracts. We want to establish the foundation first. New templates, or freely editable conditions will follow in another release.

When can we clear/delete fulfilled contracts?

Very excited for customer contracts and the ship upgrading seems nice from the test server.

One thing that is noticeable is the “technical” feel present in a few places across the interface, highlighted particularly on the new ship upgrade change. This moves away from the glossy/highly usable/made for dummies style design but (to me anyway) is a key part of the PU experience.

Hi @molp!
Thanks for excellent update!
Nice that you have made delete button for all the CXOS contracts, but I also asked about one button for deleting all finished LMOS contracts.
Is it possible to include it in this update?

This looks like a good start. Looking forward to it.

Ship upgrades will create a market for unbundled ship components, and hopefully bring more liquidity to this segment. Still waiting for the possibility to trade assembled ships.

The new custom contracts are a welcome addition. I hope that the system will be expanded in the future and will include donations of materials or cash, barter, currency exchange and loans. The players do this already on the LM with some work-around (1 DW sold at an astronomic price). It would be great to get rid of these work-arounds and have game mechanics that allow this kind of exchanges in a straightforward way.

Any way, it’s great to finally get a big update. To be honest, the previous one, Atlas, was disappointing. It’s highlight was the new universe map. However, it is still not very practical for planet searches and I almost never use it. Instead I rely on community tools, for instance on the map by plexucra: Map Perhaps the in-game map could also be improved to a allow easier planet searches and estimations for travel routes, number of jumps, travel time, FF consumed, etc.

There’s a new section in the shipyards where you can select not one, but two blueprints to start a ship upgrade project.

To create shipyard projects, a PRO license is necessary.

I believe ship upgrades will be locked behind PRO.

For the custom contracts, is there an option to specify it as Corp only? ie, shipping contracts.

I was mainly looking for confirmation that our two STARTING ships would become upgradeable.

Yes, starting ships will be upgradeable. After the the release you will see a new, default blueprint that corresponds to the starter ships and can be used as a base blueprint for a starter ship upgrade project.

In the Planetary Administration screen, FREE players can’t run for office, and if they click on the locked RUN button or the greyed out WITHDRAW button a message pops up saying “This requires PRO”. This is fine.

However, if there are upcoming candidates for election, but the election hasn’t started yet, the VOTE buttons are also greyed out. A new player might think that they therefore can’t vote in elections on a FREE license. But actually they can. So it would be nice if clicking on the greyed out VOTE button popped up a message saying “The election starts in 1 day 2 hrs” or similar, just to make it clear that they will be able to vote. Currently nothing happens at all when you click on the greyed out VOTE buttons. Alternatively, don’t show the VOTE buttons at all if the election hasn’t started yet - that might be less confusing.

Also, the padlock symbol on the RUN button isn’t showing correctly in my browser. It looks different from the screenshot in the release notes above. I’m using Firefox on Windows. Tried a hard page refresh - no change. 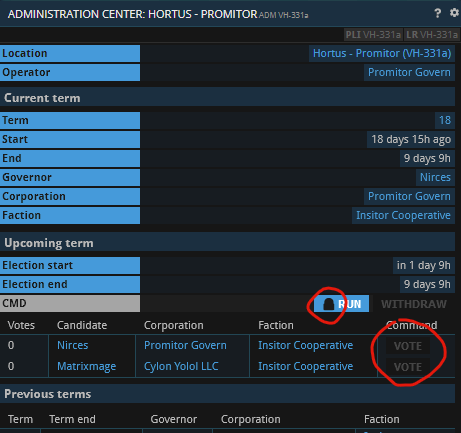 I was mainly looking for confirmation that our two STARTING ships would become upgradeable.

Yes, starting ships will be upgradeable. After the the release you will see a new, default blueprint that corresponds to the starter ships and can be used as a base blueprint for a starter ship upgrade project.

Are the players with only a trial license able to upgrade their starting ships?

Are the players with only a trial license able to upgrade their starting ships?

No, a PRO license is necessary, as for all shipbuilding projects.

I’ve had cause to terminate a contract already; I’ve noted that though terminated, it still shows up in my LMOS as an accepted contract. The other party to the contract has reported this same thing already but I wanted to go ahead and mention it here as well. Not sure if this is intended as a bug or a feature.

Also, as a licensee that does a heavy amount of shipping and trading, I really like the new Delete Fulfilled feature on CXOS, and wonder if something similar could be added / is planned to be added to LMOS in a future update.

How can I see in detail only open contracts?

The main window used to be LMOS. I mg quickly see which contracts are active, what product I buy, for how much and where without having to open each one separately.

Now I noticed that new user contracts are not visible in LMOS which is logical but there is a big problem.

New contracts are only visible in CONTS. But there is no detailed information in sight and most importantly there you can see all the contracts and they fall down. I make 10-15-25 contracts a day that may have a delivery time of 5-10-20 days. I just can’t find active contracts and execute them because they are buried by history from other contracts already executed.

If I’m blind and haven’t noticed this possibility but I’ve checked CMDS a couple of times let me know. But if there is no such a window, I’ll probably use the old method through LM.

Agreed.
I have not found a way to make them visible in a “useful” way.

please fix so that non complete contracts are more visible.