Name THAT Planet: Round 2

Thanks for all the great comments and planet suggestions! Due to popular demand we decided to go ahead and bestow the name “Nike” upon ZV-194a. Congrats to all of Nike’s inhabitants out there!

We will go ahead and move forward with naming some of the others mentioned. Please vote for which planet you would like to receive a name!

When it comes time to settle QQ-645b, I think Mythril would be a good name for Moria’s source of aluminium.

I won’t make any name suggestions as that just seems unfair currently. But I know others found this useful last time:

Sorry I noted that it was already taken when I made the poll but then it didn’t post correctly which led me to making it again and did it in a rush. But to be clear, I am aware that PG-899b is named

Looks like KI-448b will be receiving a name! Before I make the final poll, are there any others suggestions for name for KI-448b other than Fusion and Hermes?

GC-032h should be named Fusion, as it’s the best HE3 planet. Hermes not only fits the nearby theme of greek gods, but they were -early- gods, and KI-448b is an -early- HE3 planet.

Since i first suggested the name Hermes on the Antare discord, i of course support it

Gotta back Hermes on this one. But this is coming from a guy with ships named Abeona and Adiona.

Oliphant was suggested by Hthegreat4

Here is the final poll! Please select a name for KI-448b, good luck!

Hermes it is! Thanks guys for all the participation

We’ll do it again next month!

oh i like this name, keep it for another!

While I’m honoured I’m named as the namer of Hermes, I actually can’t take credit. 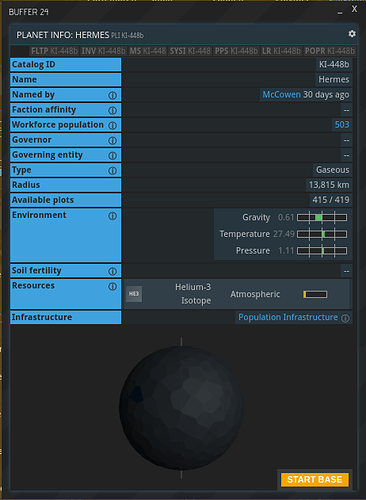 image462×631 40.5 KB
Indeed I didn’t come up with it. I suspect Nick saw my updated post listing planets and suggestions as the highest mention of Hermes on this thread, but as Hobbe says, Hermes was somebody else’s idea.
← previous page