Every bot need a second chance... to adjust timings on scripts to make it not that noticeable

Story. Not a long ago Montem got a new fancy settler. He joined and like a lot of other players start to trade here and there. Is it bad? Of course not. It’s a half of the game. But unlike most of other players he decided to use bot for this purposes. Bot was badly tuned and repost orders in 1 ms after someone else post his offer above or below bot, which is clearly impossible for human. Such activity was noticed, Montem chat was alarmed and a lot of peoples observed this. Bot was reported and what we got out of this? No immediate ban, but second chance to him… sigh. I’m disappointed. Such bots ruined fun for a LOT of players, they are hard to be confirmed and let them play… idk. Such generosity beyond my understanding, warn and forgive for using game bugs or disbalance things? Yes, why not. Forgive for intentional usage of forbidden tools? Why? 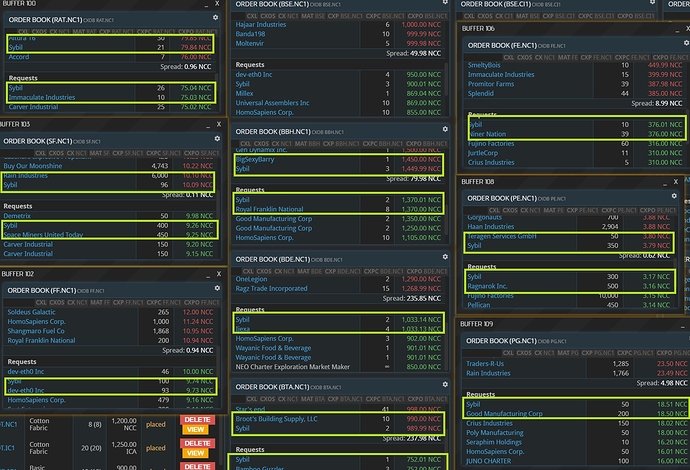 Don’t get me wrong, I don’t want to defend the bot user, but here is a thought:

I talked the bot user and told him that it is against the guidelines/rules to use bots. While he said that he understands the rule and doesn’t like it he will nonetheless stop using the bot. The play style he is currently playing is called market maker. In the real world a market maker is used to keep a market liquid. He also states that he will continue this play style, even without a bot.

The difficult thing is that it is hard to differentiate between a regular player and a bot. If the bot uses random response times that mimic the behavior of a real player it is almost impossible from a regular player’s perspective.

We could implement game design rules that make the use of bots harder or not viable, but they all come with restrictions and annoyances for regular players as well. Here are a few examples:

If you have other ideas, let us know!

Tbh, I’m pretty sure, he doesnt stop to using bot. He not only one who playing such style, but other guys even not close to him by relisting frequency and amount of tracked orders.

Cumulative listing fees can help. Starting for example from 2$ +2^n$ for each relist/sometimeinterval will be barely noticeable by casual player and limit such bots activity seriously. Or give players some number of free posts and apply list fee only after this limit.

Bypass trades also can do a trick. When you can select exact price you are selling or buying and can ignore other offers you don’t like(from bots for example). (can be limited if it match existing offers only)

How about a nominal deposit on your CX listing which is returned to you if it sells, but is kept if you delete your listing?

That sounds good! Could be the best idea so far