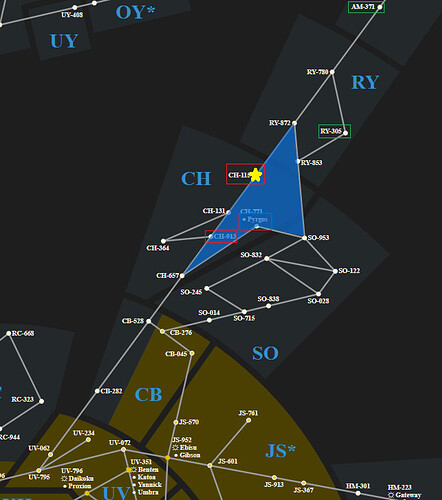 We would like to propose the Star Fleet System - a group of planets almost equidistant from both Benten (8 jumps) and Moria (9 jumps) exchanges.

The community in Pyrgos (CH-771a) has shown tremendous cooperation despite being made up of members from several corporations and with no formal government for collecting taxes. Despite this, they built an LM and a SST and have plans for a COGC.

While Pyrgos is one of the best H2O and Fertile Tier 1 planets, the real value in bringing an exchange to its area is the rich set of later game resources in the surrounding higher tier planets. An exchange would enable easier trade as these resources are tapped - and encourage more non-PRO players to consider them as their second base options.

The focus system has to be at least 5 jumps away from the closest faction system or planet.

I fear @McCowen is right: Your focus system is only three jumps away from the closest faction system (CB-276) and thus we cannot accept the registration as it is right now.

That is unfortunate, especially as those two edge systems (CB-276 and CB-045) are both empty and looked to be higher tier planets.

If we change the Focus System to CH-115, that would be 5 jumps from CB-276. Would that be sufficient?

Yes, that would work.

I trust Pyrgos, 4 jumps away, would be counted?

Yes, it would count.

We are undecided at this time - but would be either Benten or Moria.

To complete the registration, please let me know which one it is!

For today’s Dev Log entry, we’d like to highlight the tier 1 planet in our Focus System: CH-115a.

This system has the second highest LST concentration in the universe. An active Local Market stocked with Fuel (local-made) and consumables from Pyrgos. The Warehouse goes up this weekend.

This planet is a strong candidate for various industries:

This complements the LM well - as we now have weekly imports of H, FEO to support Fuel and Construction: 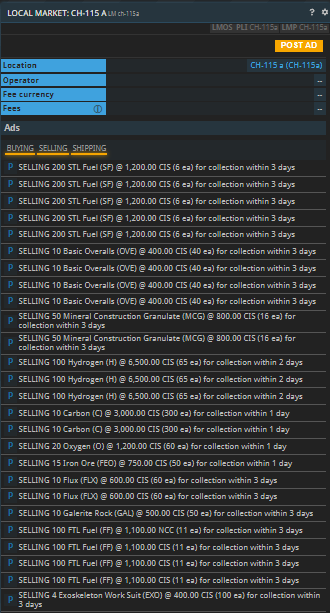 Locals were surprised at the announcement of an Aquarium to be built on Pyrgos - as there hadn’t been one constructed before. Upon further investigation, it appears the plans were hastily changed from a WIldlife Park after an unfortunate shipping mix up.

Bob the Tech, supposedly the first to arrive at Pyrgos, had this to say about the situation: “We handle a lot of shipping orders here. Mostly H2O & DW shipped offworld. So when we see this giant buy order for SOI we think ‘they must mean H2O. Who makes that stuff here?’ Anyway, me and the guys just fixed that in the system and they got their giant H2O order on time. Yes sir!”

A very hydrated spokesperson for the Pyrgos Advisory Council said there was minimal retooling needed due to the mix up and that the Aquarium should be finished in 1-2 weeks.

First devlog of the new year - and quite a bit to report.

The Aquarium (Wildlife Park) went up at Pyrgos and tech growth has skyrocketed, adding 40% last week. We expect this to continue and will allow more players to add higher tier buildings.

CH-115a has added a safety station and settler growth is coming along nicely. There is now sufficient for several players to run REF and CHPs at near full capacity. The next steps are to add an INF and recruiting someone to run BMPs to provide consumables on the LM.

LMs have been established at both CH-115b (SIO/BRM/LIO) and CH-115e (HE3). The respective planets have been offering the local products for sale and various shipping ads.

Population is growing where it counts - settlers and techs. Our main planets have extra Pioneers in their reserve pool so new and growing players are taken care of.