Welcome to a new thread on Governorship, Dover style!

I’ve been Governor of Umbra for a long time now, always as part of Mao-Kikowski Mercantile. While being part of M-KM has many advantages, and the CoGC costs were always covered, there were some disadvantages. Primarily, Governors that are part of Corporations don’t really have any insight into what their planet generates in taxes.

We also cannot truly understand what is going on in our planets, without a mass outreach program to it’s residents, or something like that. These are well documented issues about the game, that the developers are addressing.

For the most recent term I have branched off and created my own corporation, Glitch Free Umbra. This is the only way currently that I can gather some data, as I will get 100% of the taxes in through the new corporation.

The plan is, as discussed in the Umbra chat, is to leave the opening week of the term at the lowest tax rates, just to gather some analysis on how effect the previous system has been. As we don’t have a full financial week, and there will inevitably be some overlap with the change of corp collecting taxes (any existing queued orders would still be paying M-KM) we will need to do some approximation around the opening week.

The second week we will move to the highest level of taxation. This is will just be one week of maximum planetary earnings to evaluate what the potential is.

For the third and fourth weeks we will focus on Umbra’s main industry, Chemists. For the third week I will drop all taxes to min, but Chemistry to max, and for the final week we will flip that.

By the end of the experiment I hope that we can find a good balance for Umbra in that enough taxes can be brought in to help support and grow the population infrastructure. We have a lot of Technicians, and have been crucially losing some over the past few weeks with over 600 open jobs available now. I aim to put a stop to this.

It has been some time since I made the above promises.

On the promise of keeping you updated, I have failed. Until now, at least.

The taxation experiment was completed. The variations in taxes were not as abrupt, or as conclusive, as I would have hoped and expected. A problem with the data finding was the transition from traditional production queuing, and the introduction of the recurring order system.

With the traditional system, changing taxes on a weekly basis would not really capture the new values for a few days, as long queues were depleted and replaced with new orders.

Under the new recurring system, if I were to run the experiment again, I believe we would be able to collect more accurate data as most Managing Directors have switched from long queues, to short, recurring orders.

With that said, this was the data collected from the tax experiment:

As you can see with the difference between week 2 (max taxes) and week 3 (min for all but Chem) that the change in tax rate has a delayed effect.

However, back on the 22/11/2020 we were only maintaining the Safety Station and Art Gallery.

Today, we have a new Wildlife Park and VR Theatre, as well as maintaining the Infirmary now that population has levelled out.

And talking of Population, below is the report on High Skilled workers of Umbra. When we began this experiment, Umbra’s Technician population had been falling rapidly. I’m happy to report that it is now climbing again steadily. Engineers are also growing slowly. Scientists have levelled out, but I am hopeful that the new POP buildings will help them start to rise soon. 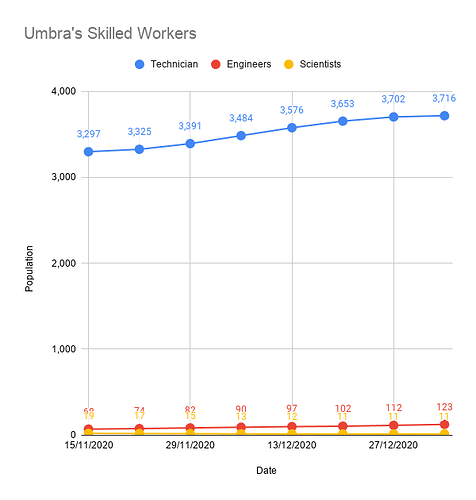 I see the decision to switch to chemistry is working about for Umbra.

As the server shuts down, and corporations close their doors, it’s time to summarise the Umbra experiment.

I was governor on Umbra for a long time. I’d first of all like to thank the population for their support throughout the game.

It the early days, it was as part of Mao-Kikowski Mercantile (M-KM). Under the current corporation structure in game, this made it very difficult to understand how much taxes were raised from the planet. One; because we had multiple planets under M-KM Governorship, and two; because I had no visuals on the corporation finances.

So the decision was made back in November 2020 to split off and form the Umbra Governorship Corporation. This was a solo corp, designed purely to redistribute the Umbra taxation funds back into her.

After playing around with different tax levels, it became very apparent that, in order to grown the higher skilled population, high taxes were going to be required to keep costs down. The other cost saving scheme was to adopt my personal “cost to produce” pricing for as many goods as possible. That is why, when you look at the General Ledger, you will see many “Personal Stock Transfer” entries. It is also why I added a column to the @Prdgi spreadsheet template that allowed me to import prices at the click of a checkbox.

The plan all along was to grow the Technician and Engineer population of Umbra. This became even more crucial after the POPI were introduced, as many planets around the universe were left without the required workforce for their base population.

I’m pleased to say that the Technician growth continued at a steady rate, right up until the servers were closed. 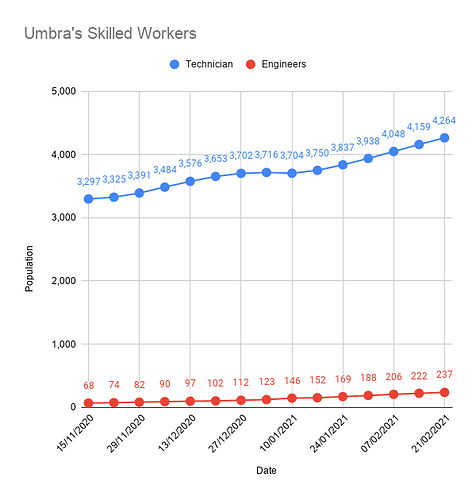 Some other summaries. Over the c. 4 month period, CIS 4,449,110 was collected in tax revenue. CIS 4,445,346.40 was spend on Infrastructure upkeep, CIS 66,280.81 on COGC upkeep and CIS 957,587.77 on Infrastructure Investment. Umbra also received CIS 250,000 from the @EatTacos88 TACO Lottery Fund, to help finance the construction of an EMC. Unfortunately, construction was not completed in time for the reset, though all the materials had been purchased.

For anyone interested in the full rundown, (and let’s be honest, we’re all just staring at spreadsheets until the new server begins!) you can find the accounts here: https://docs.google.com/spreadsheets/d/1IPxPyb6Qpv7B-ora6H4aURRiHJr57gFpstTYCROdbnw/edit?usp=sharing

TL;DR; Running a planet is expensive work. Max Taxes are required to really push the higher tier population in any meaningful way.