HEre’s a list of accessibility issues I’m encountering as a totally blind player, in no particular order. Some of these impact keyboard users too, or anyone who plays without a mouse. The mobile UI is better, though not as good as it could be. I am an accessibility tester by trade and willing to go into more technical detail if that would be helpful.

These are general issues and trends I’ve noticed. I can go into more depth if it would help, but a lot of the problems are endemic to the way the UI is currently presented. It’s possible to fix many of them by adding accessible information to some of the controls, but others require a bit more thought.

I hope some of these can be addressed soon, as the experience is currently rather tedious, particularly on desktop.

As one with a partial color problem i also have alot of problems with Things.

Some more details about the cargo problem in particular…

As a screen reader user I struggle with the cargo UI on both desktop and mobile, though it’s arguably worse on the former.

A solution that would vastly improve the user experience for me and many other people would be a UI which let me type numbers to specify cargo transfer amounts. A form could be provided which listed the hold contents and let me move goods freely without need for the mouse. THis would help not only the blind, but users who depend on a keyboard or other technology which makes dragging impractical.

For the moment, until I’m able to refuel my ships, it’s impossible to enjoy the game. If nothing else, the tedium of trying the same action twenty or thirty times to no effect is demoralizing in the extreme.

I hope this can be remedied quickly.

Hey, thanks for opening a topic for the issue!

It might come to no surprise to you that we have little experience with accessibility. That doesn’t mean that it has to stay that way. Over the weekend I started reading more about accessibility and I think there are quite a few things that can be improved without spending too much time. Some will take major effort to get right though, especially the tile layout in the desktop version.

If I am not mistaken the drag and drop process of moving inventory is the most pressing issue at the moment, right? Improving the inventory transfer is already on our immediate development roadmap, so it makes sense to start there.

I will get in touch on how to test the changes, because right now I have no idea how to do that

Thanks so much for getting back to me. Yes, without a doubt the inventory issue is the most pressing at the moment. Most other screens are at least something I can deal with. If I can help in any way please let me know, as I’m quite familiar with the relevant accessibility standards and the like.

We just released an alternative method to start an inventory transfer that does not rely on drag and drop: 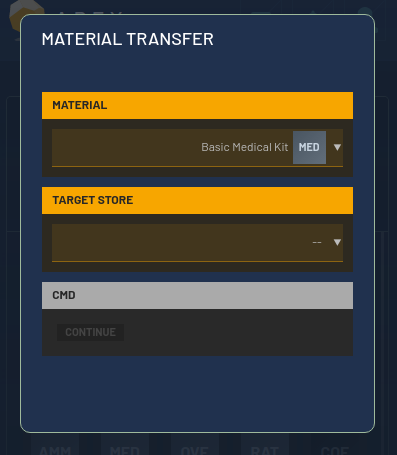 It is just a start, but we hope to be able to make the game more accessible as we go.