The most overpowered strategy in the entire game, from what I've found. (hopefully, it doesn't need to be patched.)

alright, here is what you have to do. <3 you have to start the game on the planet Promitor(it has to be Promitor no matter what or else, it’s probably not going to work)with your starting money, you get a farmstead, a rig, a collector(but it has to make oxygen constantly),and two Pioneer habitations and then finally a food processor. after that, you get straight on to making protein paste and growing protein beans for very minimum water and immediately selling the excess. once you start getting oxygen, put it up for as high as you can but make it 200.00 of a currency at minimum and abuse using a 0.99 in order to get it lower on the list if you can.

The next thing you need to buy is a third Pioneer habitation and then look on the market for silicon ore in the coming days that is very cheap, or anything else you can get that would be good to smelt a lot later. after that, you get a second food processor, a second rig and then finally a second farmstead.(note that the days before you do this, you need to keep on making basic rations and drinking water until you have enough for an entire week and more for safety, getting 80 right before you do it should be a good number underwater you are going to get a lot more of early so you don’t need to keep making that like the basic rations, you only need about three days worth of drinking water until you can get a second rig and you can just put it in the mix of the rest of your stuff since it only cost a little bit over 2 hours to make 14 of them at that point.)

(you also need to stock up on at least 3 days of the other supplies in order to get 100% efficiency and you should do this around the same time in order to make the process even faster and will end up saving you way over a day of time if you can do it early.)

after that, you keep on upgrading them in the same order as before but adding on another oxygen collector after the next cycle until you run out of basic rations and you completed the upgrade cycle, keeping up on the support supplies and drinking water in the middle of the cue when you need it until then.

the next thing you get is a Incinerator and for every upgrade after the first one, you always upgrade the farmstead and then the Incinerator afterwards until you get to the second or third upgrade depending on how good the rest of your production is doing and how much currency you are getting from what you are doing.(it’s about this time where you should start trying to either make or buy basic rations depending on what the market is like.)

after the second or third upgrade, you build a smelter and then buy the aluminium ore from market and then starts smelting it with the carbon and oxygen you already have and then you turned up and choke on or into pure silicon and then you sell it for at minimum 700 at probably the absolute worst it could be for the cost of making it and then you upgrade the smelter a second time with everything else so that you can put it on rotation.

and if you thought that was stupid enough then you are wrong, it gets even dumber, trust me.

when you are doing all of this, if you have a pro license, try to always do shipping contracts that are over 3000 currency of any type of currency or over, unless the planet you need to go to, is in your solar system, it is going to be 100% a scam no matter what because of the cost of fuel and you should completely avoid it no matter what at all cost, no matter what anyone tells you about it.

your next place has to be on the planet Montem( it has to be the next one you make a base at, no matter what. this isn’t going to work any other way)

Then you set it up to be completely self sufficient and only to be self sufficient and then the fun starts happening, you build as many extractors as you can possibly fit on your face at the same time as make me as self sufficient as possible with basic rations and drinking water.(at this point, it’s more for the other players than anything else, please do this for the sake of them and not you, they would very much appreciate it if you did.)

at this point if you ever want to do anything with anything more advanced than Pioneers, you just make another base on a random planet of your choice and build anything you want on there.(try to make it have useful resources.)

the best part about the strategy is that, at the end game. the only thing you are ever going to have to buy is, consumables, both types of fuel, silicon ore(unless you can find a planet with some on it, then good for you.), and materials to upgrade your base(that you can make later if you have a sub base to do that)(you shouldn’t try to make a base on the third main planet because you only have two ships and you can only reliably supply three main planets at once unless we get an update to build ships which we can then basically build a base on every single planet in the entire universe if that happens.)

(warning, if you do this all the way to the end then you will 100% be able to crash the economy at will, at anytime and you could definitely get banned for it if you do it enough times. so if you end up doing this to the end, please be careful with all of your currencies. just because you can play god doesn’t mean you should do something insanely stupid just because you can, imagining it happening is just as good and you have to remember that.)

The most powerful players in the game are unable to crash the economy. Sometimes, they will momentarily disrupt some material markets. The game is very much weighted towards cooperation, and no single individual will be able to command enough hard market power to truly crash the economy.

PrUn is a very complex game, and the “optimal” strategy is constantly changing. I’m glad to see that you are thinking about optimisation and experimenting with ideas.

For the moment, a good starting strategy for new players is making DW on Promitor. You will need RIG and FP.

This gives you 2963 ICA per day to put towards expansion and facility maintenance after having paid for consumables.

Of course, this setup is not worth keeping long-term. You will want to move your DW production to a better planet (such as Etherwind), to allow you to put your Promitor colony to better use.

Have fun, and keep optimising your builds!

that is not the most efficient system or plan I can take at all right now, and this is why.

right now, I am making 3,200 currency per day selling protein paste, not including oxygen sales that sell at a random time, but if it does, then it gives me 3,200 currency more for every day I have to keep on putting the oxygen on the market for when I actually sell it.

if I don’t sell it in time for my next building, then I can still just sell it for half the place by that point at 1,600 currency for everyday I have the collector making oxygen.

the next thing I can do is upgrade my farmstead again, and then grow three raw cotton fiber every single day and then sell them for either 1,500 or 1,600 currency, every single day, on top of everything else.

I think you should check the planet’s exchange that you govern, that you should know pretty much everything about it when putting up the taxes(

), and check your spreadsheets again right after that. hehe.

starts giggling at that hehe.

ps: I never use spreadsheets because I don’t feel like I need to use them at all. hehe.

I did all of this without using any spreadsheets at all whatsoever. hehe.

I think you should check the planet’s exchange that you govern, that you should know pretty much everything about it when putting up the taxes(

), and check your spreadsheets again right after that. hehe.

Are you firing shots?

I’m not claiming that the method I outlined above is the most profitable venture ever.

This is about 620 less per day than making DW.

ps: I never use spreadsheets because I don’t feel like I need to use them at all. hehe.

You don’t need to use spreadsheets. Spreadsheets help when you need to crunch large amounts of data quickly or when you wish to compare two production models. 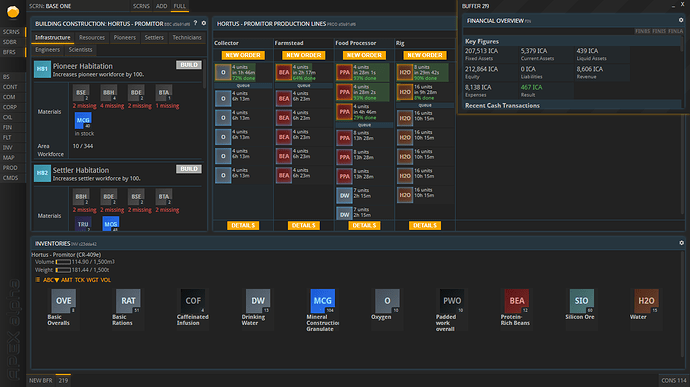 you have a lot to learn if you want to just beat me with that. hehe.

I’m not going down that easily. hehe.

why would I sell my protein beans, if I could just make them into protein paste later and still have enough currency for the next building? hehe.

why would I sell oxygen for a lower price, if I could go higher for the amount of time, that it is that high? hehe.

I honestly think your going to need a new graph system to calculate this, because obviously you are very wrong from what I have done in this picture. hehe.

may you have another day in this loss, and find a good day from it. hehe.

you have a lot to learn if you want to just beat me with that. hehe.

I’m not going down that easily. hehe.

I’m not trying to take you down, mate.

Yes, this is correct. The money you could have made if you had just sold things is known as your opportunity cost. If you could make 100 ICA now and put that to work making more money, you will be better off than making 100 ICA in the future.

There isn’t really a right or wrong strategy overall. There is a “right for me at the moment”. Whilst your current strategy is “right for you now”, you may run into issues when you start scaling it up.

Have you checked whether your current production model can scale to this profit level?