The company creation screen is getting a new coat of paint!

You can find the full issue of the development log here: link

For what it’s worth, I would like to reiterate my suggestion that planet and “class” (starting package) selection be more integrally tied together. This means that you get a list of suggested starting packages based on the planet you are choosing.

I strongly believe that this would simplify the new company creation process by: 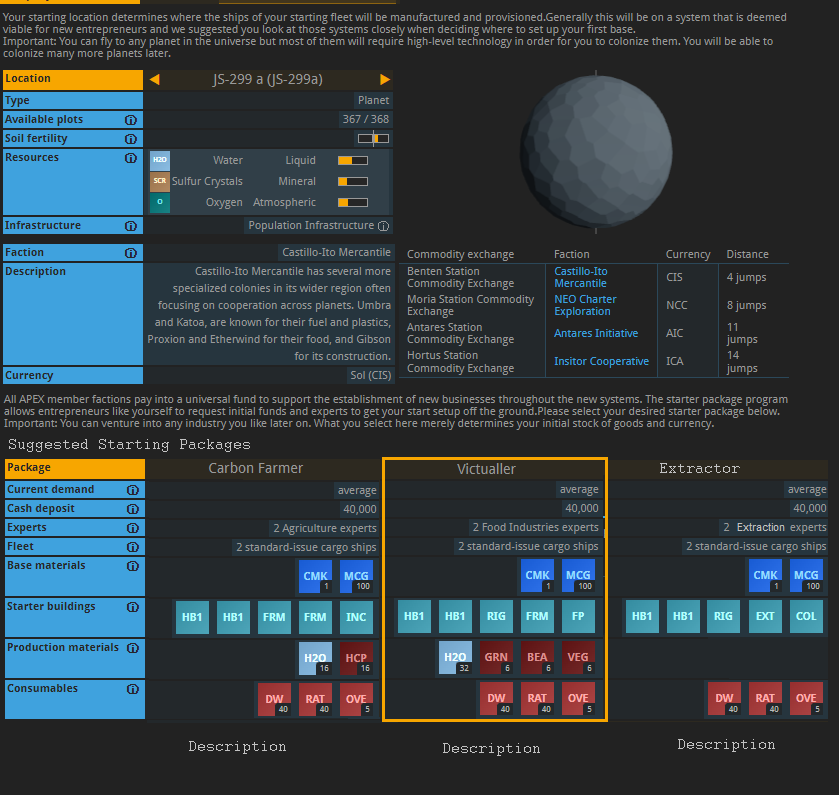 In this example up to 3 starter packages (perhaps only 1 or 2 for some more niche worlds) would be suggested for each planet, and the player can easily rotate through the planets to see the various starting options.

I am 100% certain that the community would be extremely interested in assisting with the curating and balancing of starting packages for the various starter worlds.

Thanks for the thought your are putting into this.

I really like your idea of tying starter packages and planets together somehow, so that only meaningful decisions are possible. I do see some problems with your idea though:

Maybe we can improve the company creation in iterations:

as long as we the users can still pick any package and start point.

It has been a long time for me obviously, but I distinctly remember feeling overwhelmed by the choices when I initially signed up for PrUn. Switching back and forth between package and planet selection, trying to find something that made sense, it was extremely frustrating. I couldn’t view all of the information (as little as was available) at the same time, making it even more difficult navigating back and forth. I don’t know what other player’s experiences are, perhaps I am unique, but I don’t think that I am.

I ended up settling for Agriculture on Promitor since that was the only thing where it seemed “obvious” that Promitor was meant for farming and the only high fertility planet with a commodity exchange. Based on stats for plots, I suspect a lot of players get funneled into making a similar choice either for Promitor/Farming or Montem/Metallurgy. Currently Promitor is at +1000 shadow plots, and other fertile starter planets like Proxion, Harmonia and Verdant haven’t even filled up.

I checked out the company creation on staging and I do believe that it is improved, but I think it could still use some tweaks in the future, perhaps in iterations as you suggested. One problem I foresee is that the new company creation has the potential to cause even more problems for players with analysis paralysis, switching back and forth to change “package”, “faction” and “planet” to find some combination that makes sense.

This ordering should simplify the order of operations and reduce analysis paralysis, although I suspect people will still be switching back and forth a lot to switch choices.

Iteration 2
Planet specific packages. I think I have gone into sufficient details of this already.

Iteration 3
I know it may be different from the UI elements that you are currently using, but having the ability to do some sort of panel or wheel selection where more of the options are presented on screen at any one time would be more user friendly. For planets it could look something like this: 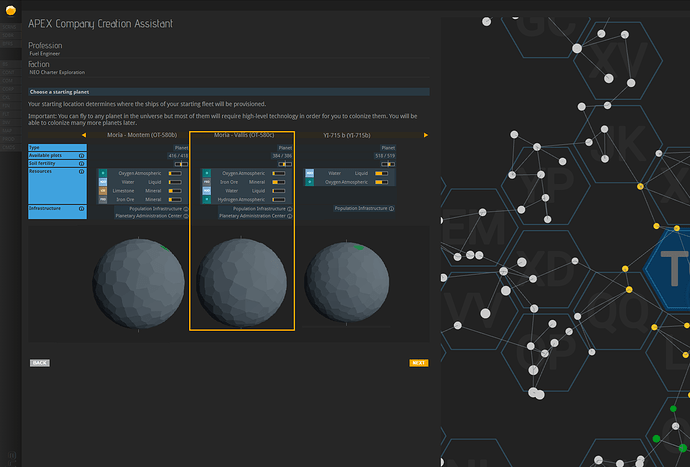 I checked and there are currently starting planets for each faction:
Castillo-Ito: 6
Antares Initiative: 3
Neo Charter: 5
Insitor: 5

Having a similar screen for faction and package selection with a graphic and/or brief description for each option would be good.

Iteration 4
Having the company creation keep choices from previous stages more easily visible/accessible would be ideal. People are going to want to tinker with their combination of choices, and going back and forth needs to be easier. Currently on staging this information is available as a line of text, but having slightly more information displayed in a more obvious way, and a button to jump to that section might make it more user friendly. Honestly though, I’m not a UI designer so maybe someone else here would have some better suggestions on how to implement this in a thoughtful user-friendly way that is not too complicated without having to rebuild the entire PrUn UI engine from the ground up.

When I first tried the game, I could understand the differences in starting packages far more easily than the differences in planets. And the factions all seemed the same. I chose Manufacturer because I liked the potential of it, and Avalon as a starting planet because I thought Hortus was a good system to be in. But it turned out to be a terrible combination, so I restarted after a couple of days.

So I agree with the devs here. I don’t think putting the faction or planet choice first would be a good idea. It’s forcing the player to make a decision about something they know nothing about as the first step. Better to have package choice first, by itself, and then the next screen is a list of planets to choose from with a recommended one as the default (based on which package they chose), so players can just click “Next” without having to do a lot of research.

Also, don’t forget that the company creation process has to work on mobile, so having a huge screen full of information won’t ever get past the design stage anyway.

Also, don’t forget that the company creation process has to work on mobile, so having a huge screen full of information won’t ever get past the design stage anyway.

Currently company creation is disabled on mobile, with a message that companies must be created using the desktop application - at least for the staging server. I don’t want to COLIQ on the main server to test it out with my main account. I don’t think company creation on the mobile version should be a priority anyways.

I don’t think putting the faction or planet choice first would be a good idea. It’s forcing the player to make a decision about something they know nothing about as the first step.

For the new company creation process, the faction selection is actually one of the more interesting sections. It now looks something like this: 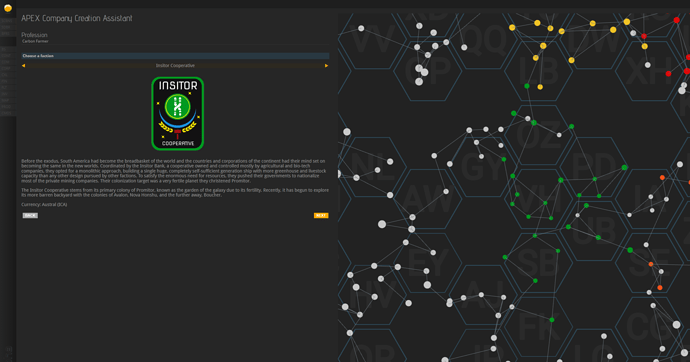 Switching between the factions scrolls the map to the area of space that the faction is located in. It could definitely still be improved, but I’m not going to nitpick and this is more equivalent to Race selection which is commonly displayed first in many games, including EVE, long before you choose class or any other details.

I think that planet choice drives faction choice, not the other way around. Also, players can set up a second base in a different faction and then switch their HQ to it. So I don’t think faction selection is as fundamental as race selection at all.

Are the devs really not going to implement company creation on mobile? That seems strange to me given the amount of effort they spent on the mobile UI. Who was that for, if not for players who only want to use mobile?

Are the devs really not going to implement company creation on mobile? That seems strange to me given the amount of effort they spent on the mobile UI. Who was that for, if not for players who only want to use mobile?

I just want to answer this real quick, hoping to not go to off-topic. Yes, company creation on mobile is deactivated at the moment. We just didn’t manage to do it in the time that we had available. To be honest it is not a priority at the moment though. The mobile version is kind of an companion app to the desktop version. One can do many things with it, but some are hard because of the UI limitations. That can all be improved on, but as I said, not at the moment.