It’s that time of week again, the glorious day of TACO TUESDAY. This, however, will be a TACO TUESDAY like none other. Rather than doing the typical RATs for 45/ea on CX planets I am selling once in a lifetime collector’s edition TACOs via a Charity Silent Auction. These are a rare-vintage, gas-grown TACOs straight from the temple. (photo evidence at end of post)

Now, these are a hot collectors item, and with the universe bound to reset shortly, this may be your only chance to purchase something so rare. So here is how this will work: If you would like to place a bid for these rare TACOs, click the link at the bottom of this post. You will have to submit your in-game name/company, price per TACO (note this is PER TACO NOT TOTAL), and qty you would like to bid for. These bids will then be ordered from smallest to largest price per TACO and fulfilled until all 1200 RATs are gone.

So let’s do a little scenario:

I estimate the cost of these TACOs to be at 300/ea, not counting the extremely rare collectors value of them. Trust me, this is not an opportunity you want to miss out on!

And lest I be accused of a last ditch money grab, I will remind you that this is a CHARITY Auction. All proceeds from this auction will be distributed in the following means:

Bidding will remain open for roughly 24 hours or until I log back on tomorrow. Winners will be contacted via discord and posted in the comments section. Let the bidding commence!

Welcome to the first and potentially only Taco Tuesday Charity Silent Auction. Up for auction this week is a total of 1200 Special Edition Gas Grown Collector Tacos straight from the Temple. In order to bid, please fill out the form below with your...

The numbers are in, and my goodness did you guys go hard! I’ve always believed charity (and a dying universe) brings out the best in people. Details are pasted below, but the total amount brought in is over 13.6 Million! As stated earlier, this is a charity auction despite how tempting it is to keep 13.6 million

. Funds will be dispearsed as soon as collected. Seeming how this has gone significantly better than I expected, I am in conversation with the CX governors now to see if they are willing take a slightly smaller portion (still 1.5-2 months worth of taxes) in order to allow some other planetary admins in on the action. And as promised 10% will be going to lucky young TACO TUESDAY participant, Mr. Red Pheonix!

Also, out of a great joy of how well this event has gone, I will be selling 1 TACO out of my personal collection of 14 to each bidder (at their per TACO price) as a thank you for participating.

I’ll be contacting people and placing ads on the Montem LM later today. Thank you again everyone! 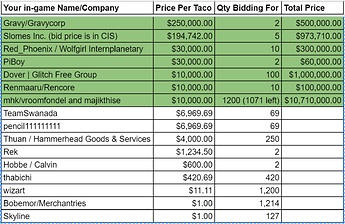 I don’t see my 1m bid in there. I think you dun goofed. This was a RIGGED AUCTION!

A certain someone may have mis-bid. How does 4 collector RATS for 1 mill total sound?

Sure. I also have agri stuff for 8k more temple RAT.