I suggest eliminating the mm on SPs. I gather they were necessary at one time but I don’t see any rationale for them now. They eliminate one of the few uses for GL, which is going to be somewhat relevant as factions gear up to build COGCs. People won’t like having to build an otherwise useless ECA, but that is true with the CLR and other buildings that they will likely build and tear down just to get the COGC up.

I think it is save to say that we can remove that MM, but I will consult with Counterpoint

The real power move would be to buy hundreds of SPs now to resell them once the MM is gone.

It reminds me of the story where they paid money for dead snakes in India to encourage people to lower the population, but people started breeding snakes to milk money from the program, and when the government found out and ended the program all the breeding snakes were released into the wild spiking their numbers.

eliminate one of the few uses for GL, which is going to be somewhat relevant as factions gear up to build COGCs

Most of the work to make SPs is not making GL. GL is pretty marginal. If a SP is 4000, GL acounts for about 200 of that price. Just based on molps message we surely have triggered the governors who are setting up COGCs in June to prebuy their SP at 4000/ea.

It’s too late to remove the SP MMs.

Please be careful removing the SP MMs. I hate the idea that only a few planets will have an easy time getting to COGC while the others have to deal with super gouged prices on SPs.

The ECA is the biggest cost in making SPs. It’s a 340k building (worth more than some full prom bases alone) that runs for only 1 day to make an entire COGC worth of SP and does nothing else. Making SPs will not have any noticeable effect on the GL industry.

So you are ok with someone buying from the MM, then relist it once the MM is removed for “free” money?

Use of exploits is against the ToS.

I’m not okay with it, it would obviously be a scummy move and would really hurt the future SP industry as they would have to deal with the “extra” SPs in circulation. I would advice molp not to announce such changes in the future beforehand because they can be gamed.

But Gladi, it’s not under any definition of the word an “exploit”. An exploit is when somebody finds a way to manipulate the server to give them free money, or duplicate their commodities, or build buildings without using up materials, or make a base on a planet without traveling there first.

Buying commodities from the MM (legal according to the rules), and selling commodities players (legal according to the rules) is not an exploit just because you had some insider information about an MM disappearing in the next patch. I’d agree it’s dishonest and scummy, but it’s not an exploit nor does it break any of PU’s rules.

Rules are important, you can’t just go punishing people if you don’t like them or their actions. That would be whimsical and unfair. 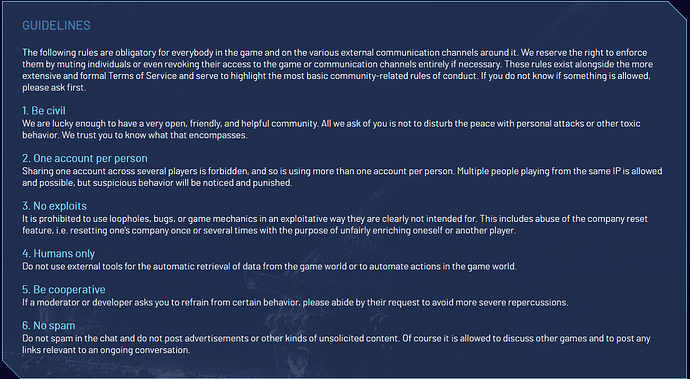 Point 3. No Exploits and the explanation.
Purchase of a commodity from a MM sell after it was announced the MM is going to be removed → loophole in my book.

I respect you as a player Gladi and I generally agree that it’s not good behavior. I’d like to see some sort of mechanic or secrecy to prevent it. But I don’t think the majority of players, nor the devs, would classify it as an “exploit”.

It would open up a whole can of worms:

What if somebody used to buy from the MM and then sell higher on a Local Market where there is no price cap, is that allowed? Is it allowed now that it’s been announced that the MM is going away? Would they be allowed to sell it for a higher price on the LM, but not the CX?

If it’s truly an exploit to buy from the MM and sell to players, then @molp should clarify and provide some sort of ruleset on what’s allowed or not. There are a whole bunch of tricks you can do with the MM that people do regularly, and if they potentially breaking the rules then it should be clarified.