Has the Roadmap secretly been updated/sorted?!

It now is separated into “Planned” and “Future” 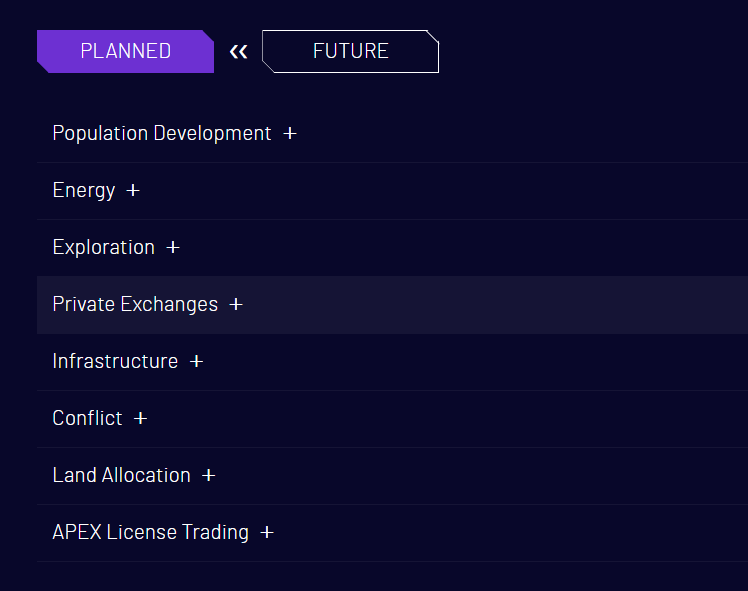 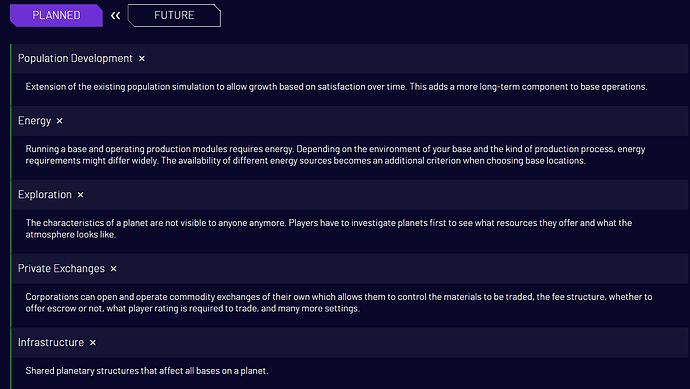 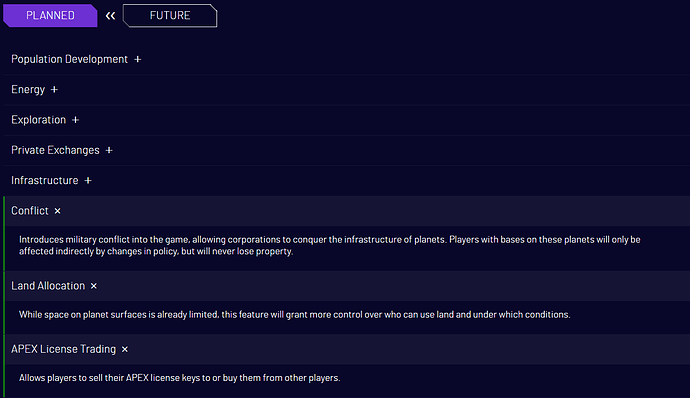 Planned has lots of interesting points.
What does everyone think of this?

Population Development - I kind of don’t get the population aspect of the game. There doesn’t seem to be much that I as a player can do about it. Each week I just have to hope I get enough settlers, and if I don’t then, well, maybe next week I will. I get the impression that the devs want the player base to work together for some things, and maybe this is one of those, but I think that part of the game needs some refinement. I’d almost suggest going in the opposite direction - make worker acquisition more PVP, for all types above pioneers. Of course that’s then difficult to do in a way that larger players don’t just steal all the settlers each week. So I don’t know. Personally I’d be happy if the population stuff was dropped altogether, from what I’ve seen of it so far.

Energy - this could be a good addition, although it feels to me that the current production system isn’t finished, so I’d prefer that was done before adding new mechanics to production. Specifically, there doesn’t seem to be any great incentive to move up the production tiers. A base full of PP1s is still the most profitable thing you can run, so why would anyone move up? If energy is to be introduced, I hope it’s done in a way that encourages higher tiers - e.g. energy efficiency improves, such that a base full of PP2s, plus some kind of energy bonus building, has a higher throughput than the PP1s. And then PP3s have higher throughput still. Though the problem with this is that more advanced players have an advantage over new joiners, which I think is bad for the game in other ways. Ideally, a brand new player with a single building would have the highest production rate of all, on a per-building basis. Is energy going to result in that? I can think of ways in which it could.

Exploration - no, please no. The fun part of this game is planning - which you can’t do if you don’t know what any other planets are like. If you want an “explore unknown planets” type of game, there are plenty of others to choose from. Plus won’t FIO’s planet seach tool make all planets known anyway?

Private Exchanges - letting corporations build their own exchange is fine - as long as only that corporation’s members can use it. We already have a problem with not enough players using the existing four CXs for most goods. Adding additional public CXs will spread supply and demand too thinly.

Infrastructure - again, this is something I don’t really get. Aside from letting a handful of players have access to planetary administration, there doesn’t seem to be much there for the ordinary player. If governments participated in the market more, then it might seem more relevant, but most government activity is done in private deals, as far as I can see. I know in theory I could get involved in those too, but… meh.

Conflict - this could be interesting, though it seems likely to turn out to be another of those things (like planet infrastructure) that a few high end players indulge in, and the rest of us ignore.

Land Allocation - there’s not really enough detail here to have a view. But whatever mechanism is used, it should not allow already rich players to hog all the good land.

APEX License Trading - sure, why not.

Military: I once proposed kind of military conflicts myself ( to sell weapons etc.). Hard to bring it into game. -Why not but publish ideas early enough to profit from the sh*tstorms.
Population: Workforce need families. And if those consume… Also a good opportunity to make it more logic.
Energy: Yes. But why you dont start with oxygen on planets/bases without it or on those ships flying around (while flying). You could bring us bottled oxygen! 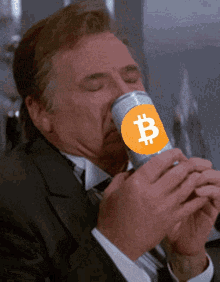 Population Development:
I am new, I suggested cities as long term infastructure prestige goals for populated planets, with the largest ‘capital’ city being visible from the planet screen. A good resource sink for producers to help with growing demand. It would allow planet populations to get into the millions or perhaps in time even higher. You could make these individual for players, corporations, community projects, or a mix of these.

If we wanted alternate names, metropolis, residential zone, settler complex. Something about having a capital city for each well populated planet appeals though.

As someone thinking about creating an ECA: I’m all for Energy.

As someone in “The Evil Corporation”: I’m all about Conflict.

Jokes aside, I’m personally disappointed with the population mechanics. @Rubicate and I were discussing the use of POPI on Montem and he basically said that “The government shouldn’t be in the position of dictating what people do,” and that, “pushing for more SET/TEC+ for the benefit of few off the contributions of many just isn’t something we want to get into.”

Now, I agree with that wholeheartedly; however, the system shouldn’t be set up to put players and governors in this type of situation. If I’m planning on building a Cleanroom and an ECA, I need techs. Badly. How am I supposed to get them? Do I build the POPI myself?

The implementation is just not optimal. POP (not POPI) is just not fleshed out enough. Planetary denizens should consume things outside of the water and rations we provide them. Fulfilling those needs, or having corporate sponsored education (or both), should allow individuals to affect the population distribution.