Heyo everyone, it’s me again.

So, with the current discussion in frostwood’s thread, I have been thinking a lot about ways to promote going up tiers in PRUN. I think there is little to not reason to move up tiers atm, and the gap between the few needed T2 mats to grow your bases to ships and high-end MM in T5 is huge.

So I analyzed the current ship tree. I only really looked into cargo since the engine tree is not very rewarding in the current settings. I wanted to look into the tank tree, but to work with the idea, it would need a rework which I don’t think is a great idea right now.

In one of the latest devlog, Molp let us know that all ships will be modular (or as we say, no more noobships)

This would make it interesting to have a progression gated behind mid-later tier population, that would affect everyone in game. Therefor, I made a small upgradeable ships idea that seem to make sense to me (def not something super detailed, just came up with it in the middle of a boring class)

This would assume that new player start with the smallest cargobay possible : 100t/100m3
I also used old MATs in the idea to reduce the blabla. This could def use newer MATs even tho I feel like we already have too many useless ones in game. 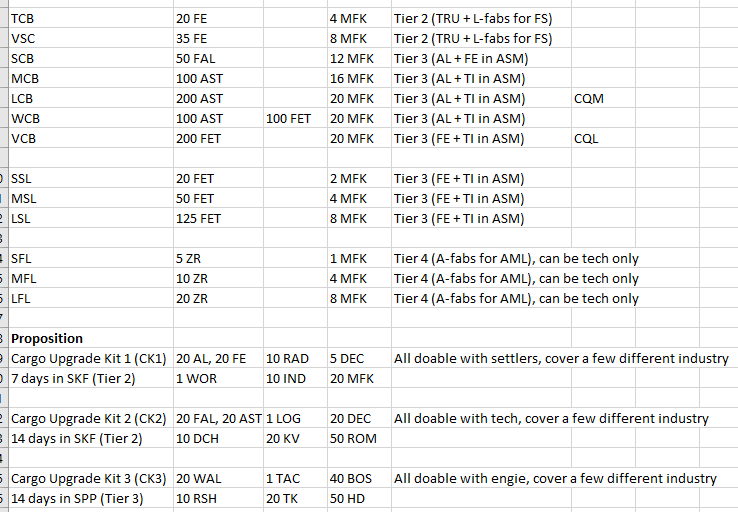 They come in 3 tier : Tier 1 allows upgrade to VSC and SCB. Tier 2 allows MCB. Tier 3 allows the LCB, WCB and VCB. To upgrade the ships, you would need 3 items : The upgrade kit, the new cargo and the required extra plate, SSC and crew carter (if applicable).

The idea behind their recipe is that they are slow, annoying but rewarding to make. A single player making them probably can’t feed more than a few friends. It would require multiple industries, in small amount to promote working with others. At their minimal level, none of these are particularly efficient to make either. The goal would really to make it something you don’t want to spam build. Getting them should be something easy, but long and rewarding for players.

Obviously this idea could translate into plate upgrades. Some relatively complex item that allows player to upgrade their initial plates to RHP, HHP or even add BPT for a certain cost.

I think, overall, this will make it more interesting and rewarding to go up the tech tree, as well as make the ship tree available to everyone in game! It can make it very rewarding for the first few groups to reach tech and engineers level earlier on without having to fill the “gap” between T2 and T5.

I’m all for upgradable cargo bays- but the 100m/100t restriction is too small.

In the first test the cargo sizes of ships were 250m/250t, because the cargo size was too small shippers charged very high prices. I believe RAT was about 200/unit with 150 considered low, and would frequently be around 250ish.

Because of the price of Carbon and consumables didn’t get shipped FE was about 2k+ in price.

The 400t/400m was settled on after multiple tests of different cargo sizes. I’m actually hoping the default cargo size will be 500t/500m to allow cheaper shipping of heavy metals and ores.

That is a point I didn’t particularly consider!

Maybe having the TCB be 500/500 and upgrading from there would fix that? I already feel like the TCB, VSC and SCB won’t see much use in brand new ships either way

Would that make sense as a progression? MCB could than be kept interesting for building ships if it stays as a “small” size (or 1k/1k small, 1.5k/1.5k medium and 2k/2k goes to large?) and make the earlier cargo bay somewhat useful

Ships need Scientists, that means for 2-3 years all we’ll have are starter ships. If you want upgradeable ships you need to focus on the Engine and Electronics parts as they require the highest tiers. I doubt a single ship would have been built by now without pre-populous SCI and ENG and am seriously concerned about SCI and ENG viability post reset. If they absolutely must have huge populations to grow from, they are going to realistically be limited to starter worlds. This will probably mean the starter worlds will each specialise to a different one of Chemistry, Manufacturing, Electronics, Construction or Metallurgy. At least the last two can survive without ENG and don’t use SCI, but what starter world T1 players are going to be happy with an Electronics COGC? Electronics and Software will therefore have to run on starter worlds…

Ships need Scientists, that means for 2-3 years all we’ll have are starter ships.

They are changing noobships to the current ignition model. The goal of the idea was to give those noobships some upgrade that are not “build a new one”

Also, if everyone had 2k/2k or 3k/1k ships, how many players would realistically need a 3rd ship?

I doubt a single ship would have been built by now without pre-populous SCI and ENG and am seriously concerned about SCI and ENG viability post reset.

With our test, engies are ok, but scis are a nightmare. Anyway, something completly different

I asked Molp what size the noob wagons would be, and he confirmed that it’ll be the default blueprint. 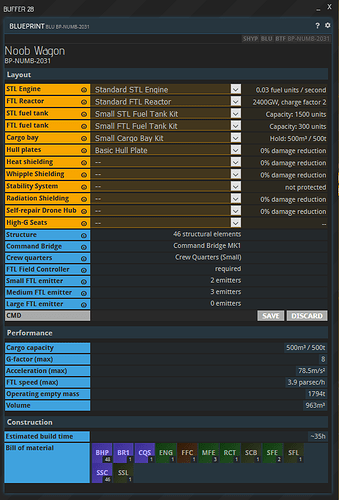 Hopefully they switch it around a bit

Besides using fewer emitters, they were pretty much useless to start out with. 100t/m3 or 250t/m3 just isn’t enough to justify the cost of the ship. The challenge in getting out a ship is getting the supply chains up and running. Adding a couple more emitters doesn’t increase the cost that much but increases utility massively.

Besides using fewer emitters, they were pretty much useless to start out with. 100t/m3 or 250t/m3 just isn’t enough to justify the cost of the ship

These cargo bays might be less useful, but they aren’t useless. The FTL speed, and to a lesser extent STL speed, can be dramatically increased with a smaller ship. If this universe were going to last more than a few more weeks I would definitely be trying to get a smaller ship to do quick/fuel efficient runs between bases that produce smaller items in small quantities. A faster ship with smaller cargo size will also let you supply bases with a smaller buffer, rather than having massive cargo haulers dumping huge loads of items that are effectively sitting in inventory for weeks before they can be turned into something useful or sold. There are also a number of component chains (mostly chemistry and electronics) that have mostly small items in small quantities, where large ships are very much wasting cargo capacity to visit there on any regular schedule. In the long run it would make sense to have a smaller ship capable of making these runs.

to be honest, when I started looking at it, my best idea was to just send the noobships to do the small hauling work instead of getting a whole small ships

The high tier engines cost and arm and a leg (and your firstborn) compared to low tier one, without talking about the fuel they use

Guess they aren’t that useless, just very niche and not… useful…

I feel like the tiny cargo could be used to quickly haul electronics stuff around . That ways next to nothing. But yeah, not worth the cost of a ship currently.

to be honest, when I started looking at it, my best idea was to just send the noobships to do the small hauling work instead of getting a whole small ships

The main reason not to use the noob ships for this purpose is their FTL tanks are really bad. If you have planets that are far out, having a speedy ship that can actually hold enough fuel to go to the middle of nowhere and back at max FTL can be quite useful. Of course if we can upgrade them, it would definitely make the smaller cargo bays even less useful then they already are since we could slap a larger ftl fuel tank on a noob ship.

Guess they aren’t that useless, just very niche and not… useful…

I agree, for the total cost of the ship being fixed for a lot of components, it doesn’t make sense. I think what really needs to happen is more granularity in ship components, especially BR and CQ, and have the smaller ships be significantly cheaper or, more importantly, lower tech.

Another balance change that would help make the smaller cargo bays useful is if we would need multiple (much cheaper) STL engines on a ship depending on the size of the cargo bay. In real life, the more mass your ship has, the more thrust it will require if it is going to reach orbit. For an example of how this could work in game, the number of engines required could be 1 for a ship with a tiny cargo bay, 5 for a large cargo bay, and 8 for a high load cargo bay.

To balance we would need to remove the ACS from the STL engine formula (especially since the description of this item specifically mentions FTL reactors), and each engine would require 1 Fuel Pump, 1 Nozzle, 1 Flow control device, some Fluid Piping, some quantity of Thermofluid (coolant) depending on the type of engine, an amount of metal or alloy of an appropriate level for the engine, and a fastener kit.