The 2021.4 release will be released Thursday, September 9th.

You can now expand a base’s area by investing up to 2 additional unused base permits in the base overview screen (command: BS).

You can now demolish a whole base by demolishing the core module. To do so, the base’s area must not be expanded via additional permits, the core module needs to be the base’s only remaining building and the base cannot be your HQ. You will also need a storage (i.e. a ship or warehouse unit) for the reclaimable materials (note that core module kits can never be reclaimed).

You can now filter local market boards for buying, selling and shipping ads.

If you have an active PRO license, you can now move orders in your production queue up or down a slot via the respective buttons in the PROQ command.

Will we be able to communicate with the planet if we have a warehouse?

No, not yet, this is still something we have to think about / implement.

If you tell us how big that TS Deposit on Avalon and how high those MM prices will be, we could already run some calculations and plan our bases accordingly. And maybe even provide some early feedback to the numbers before they go live.

Some of these MM are literally ridiculous…

At current prices, STR is almost 7k profit/day which is approaching 2 days ROI on the building (15.2k)…

but that STR and UTS are completly out of whack

Thanks! We already discussed that earlier today and STR and UTS will be lower.

People are talking about prices? Where are the new MM prices?

They are available on the test server, these are the numbers that I posted in Discord earlier. Keep in mind that some or all of these are still a work in progress and may not be released as is. 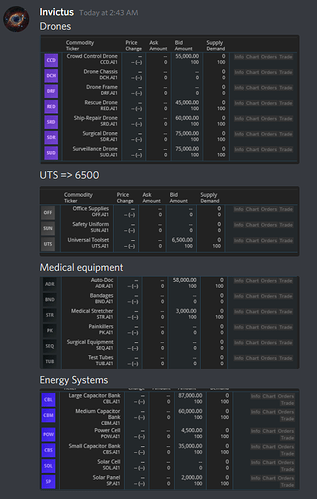 Edit: Others not listed here 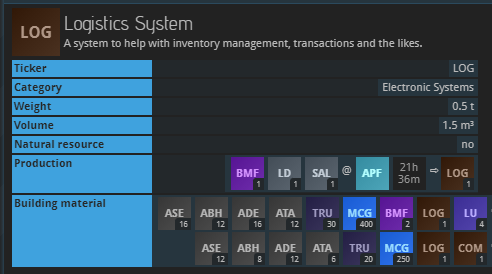 These MMs will totally kill the economy.

Do not continue this path to lead players to focus even more on cash minting cash from MMs. The engagement and focus on planetary build up should be increased. Therefore incentive the Engineer and Scientist MMs. I would even recommend to not include most of the MMs proposed here.

But if, then i propose the following price list, which is already Generous, very generous in terms of profitability and ROI.

Huh, that auto-doc price is only 2k below where I listed my auto-doc prices. However, I figured the price I listed was higher than it aught to be because I factored in the added cost of losing 1 of each lfab due to the building being torn down 10ish days after I built it.

In other words, it’s way too high where it is.

BTW Corlis, your proposed change would make producing ADR a loss. It would need to be at least 45,000. That’s just barely pulling a profit too, relative to the building cost as it’s only 2k profit per day.

I’d reiterate an old idea that has been proposed as I think it’s relevant here: make the MMs dynamic. Every time they get hit (or every X value they are hit for - i.e. items*price), the price lowers and only increases over time (to some max).

The increase factor can be tweaked with future minor updates if needed (I know there will be some learning here). But if something is mispriced - it won’t be for long.

If actual demand is higher - then the MM is just a backstop or can be raised later if currency needs to be injected in to the economy.

And if you REALLY want to act like a human trader - then if the MM is hit more than a few times, it OFFERS it below where it was hit to get out → thus inspiring people to find uses for the items on sale…

I’m just curious why UTS and STR are even on the list… I suppose to enable SRD and SUD respectively (I’m assuming SUD is the Auto Doc Surgical Drone)… but man is that a bad way of going about it.

I would have not put UTS / STR on the list and just made the MM for the SRD / SUD higher. Maybe people would vertically integrate, but I would believe that having dead-time in the FS would lead to producing SFK/MFK for the market to consume… other downstream products should get the MMS.

Just slowly move the line out and use Ubermensch’s suggestion of the dynamic MMs.

ot put UTS / STR on the list and just made the MM for the SRD / SUD higher. Maybe people would vertically integrate, but I would believe that having dead-time in the FS would lead to producing SFK/MFK for the market to cons

I will agree that STR absolutely should not have an MM. Neither the BMP nor the AL or PE are things that need help existing in the universe.

As for the others, it would be better if the ROIs were bad. Good enough to help out a building that would be running 10-25% of the time without the MMs, but not so good that you build the whole chain just go get to that one building, because if they’re too good, people will be left completely overextended when you nerf the MMs. Not the first people who will make tons of money, but the people who try to get in on it, only to see their massive investments become worthless overnight.

As someone with a fresh base on a TS planet I just have to nag (here also) about a TS source on a starter planet in a system with CX and “H” as well. Allmost everybody of that 300 companies can just switch from mining the “SCR” and directly refine about 300 FF a day with only 1 extractor available.
No hard logistics no INS, no SEA, no AEF required for that…

I petition for removal of all of those MMs directly again.

Use some time and overhaul the prices, without shredding the economy.

You cant be serious to basically create a sink for FE and AL, which then drives up the whole economic price levels up to the point where its almost still more profitable to sell to MM and buy prefabs from MM, then making prefabs on your own.

So, given courrent MOR prices & without any experts, luxuries or CoGC or such…

IDC & EDC ROIs might be higher (or lower) given the lack of price data for Engineer / Scientist consumables and Bulding Fabs. Those values are pretty much meaningless since both Engineers and Scientists are pretty much Unobtanium right now.
Too lazy to enter the other items into PRUNner, especially given that some of the inputs aren’t available on the market and it’s ROI estimates only work based off that assumption.

The point I wanna make is, meanwhile, ROIs for producing PP1-BSE is at 16d, PP1-BBH is at 22d.
…you really want people to use their (already price-spiking) FE for MM farming instead?
Then for what reason did you remove the RAT / DW MMs?

You know what bugs me most about those MM updates?
You got a whole community of spreadsheet nerds – use it! The people here are happy to help figure out fair prices and stuff before changes like this go live. It’s good that you published those changes to the test server a couple days earlier, but the way I see it, that thing should be for new feature testing purposes and not for keeping new MM secrets. The prices should have already been listed in that initial release note announcement we got here.

The MMs are totally out of Place and still barely anything got reconsidered, despite the outcry of the nerding community.

Please just remove those MMs immidiatly and reconsider them as a whole and approach it anew.

Please note that we really mean what it says in the release notes. These MMs were introduced to “stimulate the economy”. Which means that if you deem them profitable, they should indeed fulfill that role. Now, we also have graphs set up to monitor the numbers very closely and will adjust the MMs gradually (up to a point of removing them again) depending on how “bad” the farming becomes.