With the recent changes to the MM for higher tier POPI consumables, and the tweak to Base POPI generation, tl;dr we really need more finite control of taxation. Right now these vastly expensive POPI buildouts to get Engineers and Scientists are socializing these costs onto newer players who are just running Pioneers. I propose a progressive tax system to more accurately reflect the true costs onto those who are consuming and reaping the benefits of them.

I’m unsure of what is planned for the politics update; so forgive me if these ideas are rehashed.

Rain discussed POPI itself in this thread:

Feedback on POPI in this universe

I feel that PIOs consuming Culture and Comfort is actually a good thing. However, it also feels incomplete. How do you feel about governor capabilities to restrict access (absolutely, or % reduction) to certain “happiness things” like Culture and Comfort based on population type? Perhaps if implemented such an effect could increase crime or reduce happiness in the affected population. Its a little dystopian, but could have some engaging roleplay aspects too. I agree with this concern. How do…

But I want to discuss funding of it here. So what is the current problem?

What would this look like? (values are arbitrary, I don’t know the correct values)

Additionally, given that each base provides a small amount of Safety & Health, quantity of population also plays a factor. (values are arbitrary, I don’t know the correct values)

Again, I’m no expert onto what the correct numerical values of these should be. All I know is that taxes on Pioneers are too high, and taxes on everything else are too low. I think these two tools would give far more control to the planetary governors to correctly tax the inhabitants in a manner in which reflects their consumption of POPI. I think this would result in a far healthier experience for newer players, especially in the coming months once the buildout of POPI continues and costs continue to rise. This isn’t a huge problem… yet, but it will be.

An additional bonus is that maliciously high tax values could disincentivize inhabitants from building certain tiers of buildings during periods where there isn’t enough available population to support that many production buildings while also increasing funding for the buildout of the needed infrastructure.

ps. while I have my soap box, changing the tick size on the cx markets would vastly improve the health and liquidity of the market. “penny frontrunning” by 0.01 is a huge problem. People get to be “first” in line without actually sacrificing any meaningful value. I suggest changing the tick size to 3 sig-fig’s. Ex:

Every power of 10 the tick size would increase. The structure would look like this:

We would see far tighter spreads on the cx markets with this change, along with far greater and more healthy liquidity across all of the markets.

Thanks for listening! What are your thoughts?

Your typical progressive tax system usually works with brackets, where the first x value has a certain amount of taxation and the next y value has a higher amount.

Each tier could have their own tax brackets that governors can adjust, with the restriction that the first tax bracket on starter worlds is locked to 200 free pioneers. That way brand new players do not pay taxes.

I feel like taxes should be per worker-day not per building-day, after all infrastructure usage is per worker not per building on the bases. Right now 2 FPs use as many workers as one PP1, but get taxed twice as much.

We really need to change how taxation works. I want my techs. I make good money off them. I’m also willing to pay my fair share of taxes for them, but the way it’s setup right now, the POPI for them gets paid for by the many newer players running PIO buildings only. It’s not only not cool, it’s very unpopular for governors to raise taxes to build POPI for higher tier buildings that those who pay the taxes cannot afford. How are we ever going to get UNI’s up and running like that?

Different taxes for different workforce types is nice. But to make it progressive will probably lead to avoiding tactics like spread a PIO base over several bases instead of making all on one base (what you originally wanted to do). Also it makes calculation of the costs for your planing much more complex so “power player” will gain even more advantage.

Dont get me started in this topic. Its just completly Bad Designed.

Unfair taxes, different per building, but not managable… Governors dont get any Information.
Not a dime of Management available for managing the income. Planetary taxes Distributed as Dividends on Corporation? The f…???

POW: 25/week at 4k/unit for 100k/week- already insane for just twice the comfort.
the other things I don’t have a market price for and that’s concerning.

Estimations on some FOWL Prices, which are fairly low. 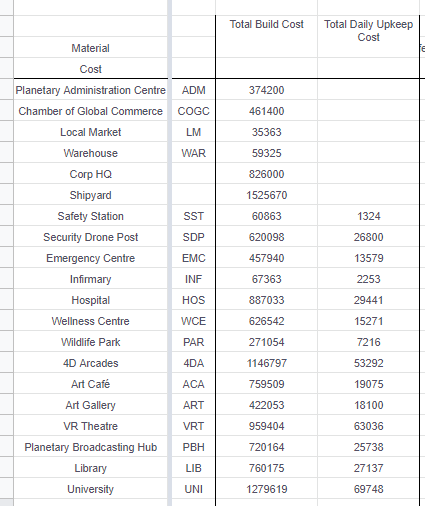 It allows configuring all of the various costs, etc associated with constructing/launching rockets through formulas with various input variables.

A system like this with one formula per tier would allow governors complete control over categories, tiers, progressive taxes, regressive taxes, etc. Going from a situation where governors are forced to have a single fixed tax rate to forced progressive rates would be a step to the side. And the development cost of a system like this could be amortized over various other things like corp fee structures, etc.

I suppose I wouldn’t suggest exactly this system. Using common spreadsheet formulas would probably be more familiar to players and it would allow easy testing along with named cells.

I think these are all great ideas - and they all would get us closer to the goal of being able to correctly tax inhabitants of a planet relative to the POPI their bases consume, and stop over-taxing the poorest and smallest players just joining the game.