Here are some suggested changes to the company creation screen: 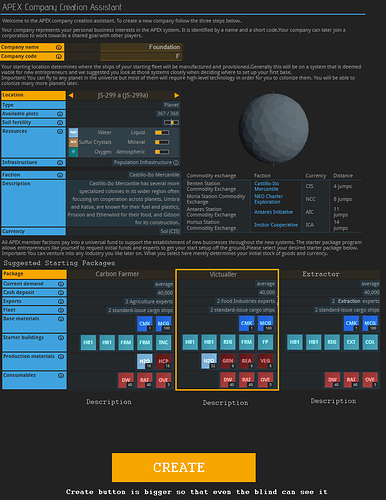 Disclaimer: I’m not a graphic designer and this was done in MS paint.

The goal here is to improve the retention rate of players going through the company creation process. Right now it is not an intuitive process, and you are probably losing a lot of players before they even click the create button.

The other goal here is to tailor the starting packages based on the starter world. The current interface where you need to select a package and then a planet is extremely poor, and you need to click back and forth between the tabs to see all of your options with out much information about the game. Many players start off with a package that is not good for their starting world, with no idea that they are setting themselves up for failure. By giving them three good choices for each world that they can start on, you maximize the opportunities for a new player to succeed. This also allows us to tailor the starting packages to the worlds, so that we don’t just have a handful of generic packages that aren’t actually viable on most worlds.

At some point in the future, perhaps governors could have the ability to update the suggested starting packages based on current market demands.

Suggested starter package options for various planets could include:

As a relatively new player myself, having discovered the game through Steam, I generally agree with a lot of these suggestions. I did quite a bit of due diligence before I even tried the game, having spent a few hours reading about the game, checking out the handbook, etc. When I finally decided to hit “Play Now” for the very first time, I already knew which package I wanted, which planet I’d put it on, and even what my company and symbol would be. But even after I had done all of that research, walking through the actual setup was not at all intuitive and I was afraid I was making mistakes until I made it through it all. It doesn’t help that the actual process has been updated since the handbook guides were published. All of the content is still there, but the sequence has changed and there is very little reassurance from the process that mistakes aren’t being made.

And while I think the game definitely caters to folks like me who do the research and put in the out-of-game time to get the most out of in-game time, I think expecting anything of the sort from a broader audience is problematic. Most of the Steam feedback from folks who didn’t come from the browser version are from people with <1hr of playtime who just clicked “Play” and found a non-intuitive spreadsheet that required external research and checked out.

Related: I think it would do a lot of good to change the name of the new-player license from “TRIAL” to just about anything else. Honestly, “BASIC” should be the name of the starter license, and the post-subscriber license should be called something like “STANDARD”. The connotation of “TRIAL” is that you’re getting temporary benefits that will expire, and I think it drives a lot of the negative feedback about the paywall. Anyone who actually dives into the game realizes that the PRO sub is easy to live without for a good while (or even indefinitely, depending on your preferences). But many players never get there, because they encounter a game that requires some acclimation under a license called “TRIAL”, read other negative feedback about paywalls, and then quit.

Anyway, just providing a little anecdotal feedback. I made it through the onboarding process and really enjoy the game (I’ve even purchased a support tier and am very excited about the ongoing development of the game). But it wasn’t intuitive even after having done a lot of due diligence research beforehand, and MOST new players will not do that.

I really like the look of the quick UI that the OP hacked together, and I really like the idea of linking the planet selection and package selection so that it is much clearer to new users that their initial choices are not setting them up for a much harder life (or learning about COLIQ in their first week).

That said, I do like the initial starter packages. While it may not be economically viable in the mid-term for a Victualler to devote energy to water extraction, farmsteading, and food processing and should rather specialize, the initial starter package that suggests all three buildings really does make the actual job of space farming more intuitive as a player gets their bearings, and it takes time to figure out what you might want to do as a specialization.

So, a more intuitive onboarding UI with the existing package options seems like a great starting point.

If you were a DEV and you setup packages relevant to the current environment or economy you provide incentive and impact the market greatly. I don’t think we should have tailor made packages by the devs. I would agree maybe with having players getting the option to possibly start with X amount of credits, and then choose between DEV created and player created packages. Dev packages would stay the same, but players could create their own and name it certain things if they wanted. Maybe apply a price point to DEV packages and then create a player exchange for packages as well.

I also think if companies or governors sold their own packages they may be better than DEV ones. Because they may have inhouse production of construction materials to sell to them in the package. I think a governor or company selling a package would have incentive to market it towards areas they want improved in the game. Thus, the starting players or future producers of that industry, would want to be talked too by the ones selling the packages. Players buying packages from other players for their starting companies would interact a lot with deals.

I think there could be a chance of greater return with players buying player packages. I also think players buying player packages would interact with more deals in the beginning.
It would promote interactivity and profits of starting companies. Increasing profits and interactivity of starting companies would increase the player base.

Dev created packages, the material costs, would probably have to be associated with average CXL price. Then it would be up to the players to create packages to beat it.

In conclusion I’d say having the DEVs manage those packages is not appropriate. I would support giving the player more options and then letting them come up with their own strategy. Giving them the option of player based packages introduces them to the market right away and the core of the game. Please let me know your thoughts or concerns with this.

I like the proposed changes, and the idea of giving new players only options that aren’t completely infeasible. I wonder if it would be possible to change the proposed planets from time to time, to avoid situations like the thousand ghost plots on Promitor. I could imagine a new corner of the universe being “developed” by placing a new CX there, and after some time the planets in that area becoming the new proposed starting locations.

But for me the most important changes I think the company creation screen needs is better feedback when somebody chooses a company code that isn’t available anymore. This is rather obscure at the moment, and is the point where a new player might get stuck before even entering the game.

A) I think the mock-up from the OP is an improvement over the current UI for company creation.

B) While giving the player the option to make bad choices is an aspect of this game, I definitely agree that that suggested starting packages should be based on the currently selected starting world.

C) Expanding on the idea of TheNegotiator, it may be interesting if New Player Starting Packages were an upkeep program funded by local government, as a way to attract new population. But it may be a bit tricky and unbalanced to put the new player starting package into the hands of existing players competing with one another to attract new players to their world. But it would be interesting to move more of the economy into player hands.