This will form the public record of finances for the Boucher Infrastructure Grant.

Unfortunately our big launch is marred by some ADM malfunction, and we are not able to direct the tax revenue to BIG. I have already been in touch with the manufacturer, and it turns out we are still under warranty. They have assured me a tech, someone by the name of “molp”?, will be out to try and see what’s wrong this week.

The CoGC did start a new upkeep phase, however, and so I personally loaned BIG 50,000 ICA as start-up operating funds. Fulfilling the upkeep cost a bit under 20k, so this loan should (hopefully) suffice until the ADM is repaired.

In general, I will try to buy RAT, DW, and MCG locally on the LM, and haul in PE. I have sold a stockpile of PE I brought for the CoGC to BIG, using the lowest offer price on Prom. 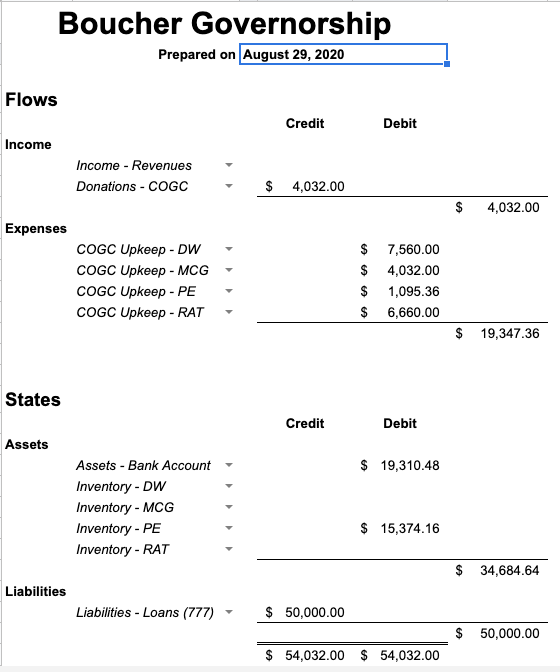 Oops… I never posted this last Sunday. Well, lets do it now.

The ADM is fixed, we had our fixed tax revenue. Not very much, of course. We may be on track to reach 40k for this week, which may be sufficient to fund the Populous Infrastructure upkeeps during the grace period, such as they are.

Note that I’ve updated the report such that the FLOWS are only for the period listed – typically it will track the in-game week Period. This should track the tax revenue & population reports nicely. 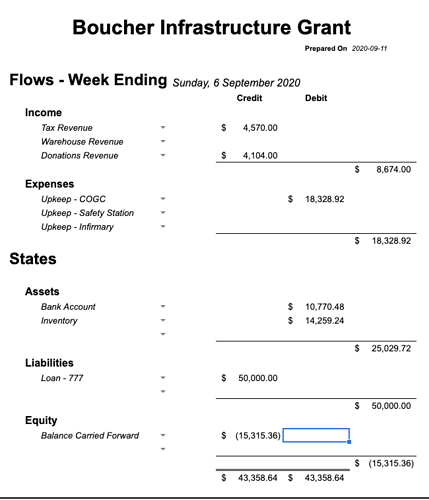 image650×757 21.5 KB
I also need to update the Stock On Hand summary, but currently the Grant only holds PE:

Hello Boucherians, and interested parties from the interplanetary community!

This marks our first week with full tax revenue collection, and the take amounted to 44,200. While more than enough for the CoGC, this may be insufficient to upkeep the SST and INF as well.

However, the grace period buff has kept us in great shape. Yesterday’s POPR was very positive, with big increases in Pioneers and Settlers. Some patriotic citizens have seen fit to donate to the SST upkeep, and we will satisfy 2/3rd of the SST this week with no further contribution. This will be a greater fulfillment than last week.

In light of that, I purchased some upkeep materials to start a stockpile for future need (see the Inventory Summary report below), and otherwise held the funds. The CoGC will need funding this coming week, so next week’s report will show some expenses. 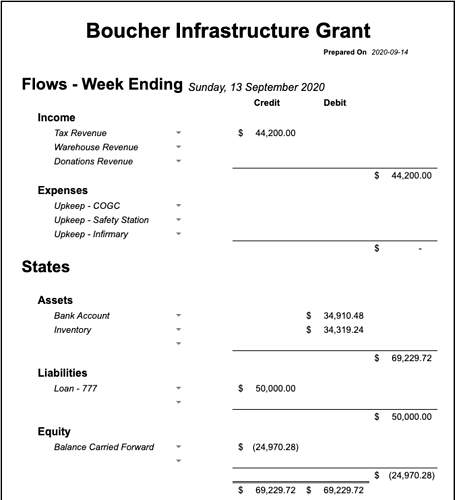 Purchased some OFF and SUN for future use. Still have good PE supply as well.

Revenue was up nicely to a bit over 80k.

We also had donations from a number of individuals towards both the CoGC (thanks to @IshNarGarn) and the SST upkeep (thanks @th3krack3n and @possum). Much appreciated as we get spooled up.

I spent funds purchasing upkeep materials and getting them to Boucher, and decided to buy extra amounts for those that we likely aren’t producing on Boucher when there was inventory available at a reasonable price. Here’s where we stood yesterday:

To afford all this, I extended another loan to BIG in the amount of 150k, bringing the total loan amount to 200k. We have over 50k cash on hand to cover any needed purchases this week, tho I think we are good for the week. 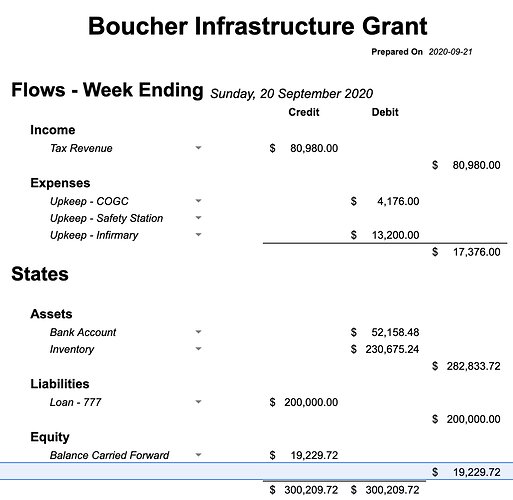 Thinking about the future, we may need to upgrade the SST to 4 and the INF to 2 when the grace period ends. It’s hard to tell for sure we will absolutely need this to maintain the workforces, but there is a secondary perk to upgrading: we may be able to fulfill only one or two upkeep consumables, allowing me to cherry-pick the cheapest ones.
If you have any spare Bfabs or TRU on Boucher, consider contributing to one of these upgrades. I recommend the INF if you employ settlers or technicians, the SST if you’re just pioneers.

First, the CoGC upkeep came due this week. While I waited for some LM ads to be filled with the missing mats, @Renmaaru & @th3krack3n stepped up and donated the missing amounts. Thanks to them both.

Our POPR was almost off the charts this week. Never have we seen such workforce growth. Which is great news, because I believe this is the last POPR with the Explorer’s Grace buff to happiness. Next week, it gets real.

In preparation, I topped up the SST for the week as much as our stock on hand would allow, and have sourced the remaining DW. Here’s our current inventory situation: 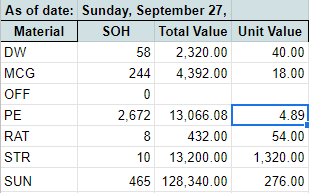 I also contributed the weekly STR to the INF, but the SST ate all the OFF on hand, and we never had any TUB. Which brings us to an important question: Is the Boucher government going to fund the INF?

We received almost 90k in tax revenue this week:

This will not fund the SST at level 3, which is where I have targeted it to be starting next week. It is a far cry from funding the INF as well:

We will need to raise taxes at least to cover the SST, to 13 from 10.
If we are to cover the INF as well, the fees would need to go up to 18-19. I am not ready to raise taxes across the board to fund the INF. However, since there are some industries that cannot be run without settlers, I will vary tax rates by industry to try equitably raise the amounts needed. The INF will be fulfilled if funds allow. 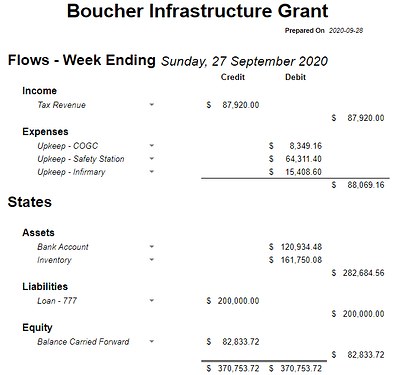 As a newly minted HYF owner, I’m gonna need that INF upkeep. Also have just two GLs, and could bring some TUB out from time to time. Curious if there might be a way to contribute to INF upkeep as part of HYF production (since it’s taxed as Agri).

I’ll give this some more thought, but I think we could tie it to MHL construction, somehow. Like through gov’t backed MHL production in situ and with high taxes on Construction, maybe. Or just a fee on every MHL purchase. Perhaps in exchange for free COF for farmers, or something like that.

Perhaps Populous will allow for a measure of socialism…

As you may know, the grace buff has worn off, and the real math driving our new POPI reality has begun to reveal itself. It is… interesting. Let’s asses the state of our finances first. 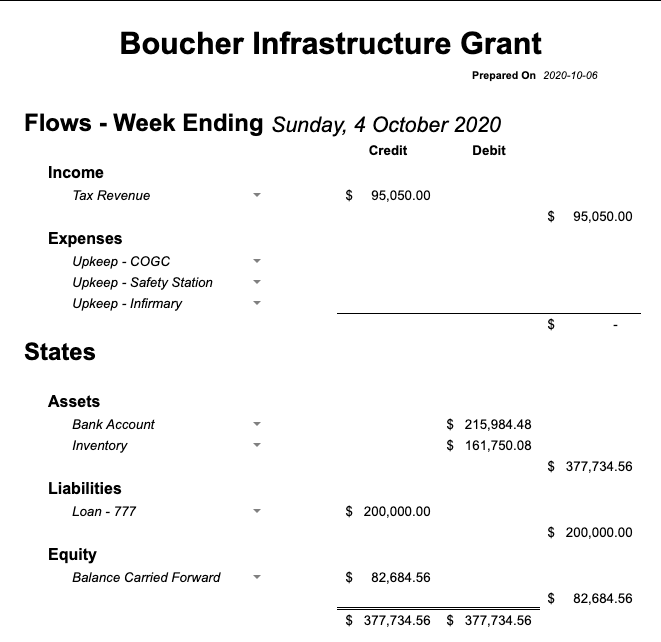 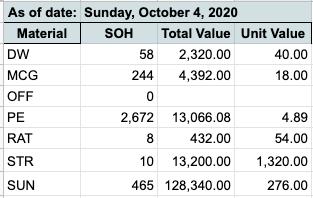 As you can see, not much has changed. I fulfilled the CoGC and the POPI for the past week in the previous week. Following that pattern, I would have filled the POPI for this week on Sunday, shortly after the POPR…

But, I didn’t, because it seems a waste. We have massive overpopulation now:

We could lose a third of our Pioneers and more than half our Settlers, and still have every job filled.

The SST reserve is already filled for most of this week. I’m of a mind to leave it as it is, fund the CoGC when it comes due tomorrow, and spend nothing else this week.

If the next POPR is as mild as this one, we’ll lower the taxes way back down, and we’ll re-examine just what this government actually needs to fund.

Apologies for the delay in getting this report out. Let’s start right in with our status at the close of last week: 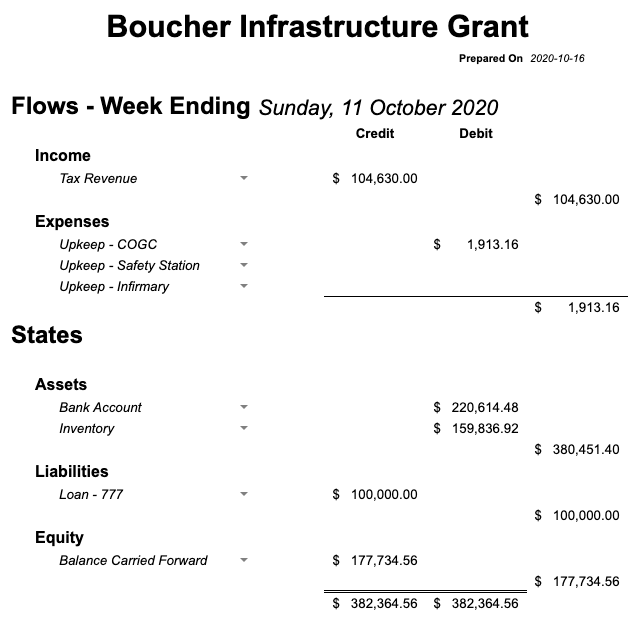 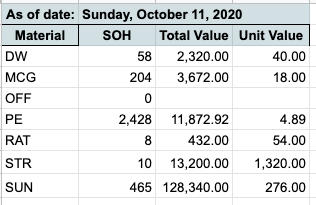 First, thanks to those that stepped up and helped with the CoGC upkeep last week. Your donation is appreciated.

Second, our cash position is very strong, so I partially repaid my loan.

Third, we did not fund any POPI upkeeps, as discussed last week. And, I think the results speak for themselves:

Pioneers and Settlers flat, which is fine. We still have enormous overpopulation. I will not be fulfilling any POPI upkeep this week either, tho there were still some reserves to be consumed. They will finally be completely empty later today, so we’ll see how the upcoming POPR & next week’s POPR look.

If happiness completely collapses, it seems population loss is capped at 10%, so we’ll have weeks to make any corrections before losses would actually endanger base staffing.

So with no POPI upkeep expected on the horizon, I’ve cut tax rates in half already earlier this week, and I am cutting them further now since our cash position is so strong. Even after repaying the remainder of my loan this week, we’ll still have over 100k. That would cover 5 CoGC upkeeps, which is 50 days.

Accordingly, I will set production fees to 1 across the board. WAR & LM fees will stay as is, to encourage responsible use.

There is still the open question of the Technicians, Engineers, and Scientists, almost all of whom are employed it seems. Funding their need fulfillment would be quite expensive, and I imagine less than 5 bases are responsible for all of these jobs.
If any such Boucharian were interested in making a proposal by which our Government could help in their support, I’m happy to listen. However, I will not tax everyone on the entire planet to support one base, so it will likely have to be something creative (like targeted industry tax rates, perhaps).

I apologize for the delay in the report again, but this will need to be a quick one. Essentially, the only significant event has been the discharge of my loan, and I purchased CoGC materials for the coming week: 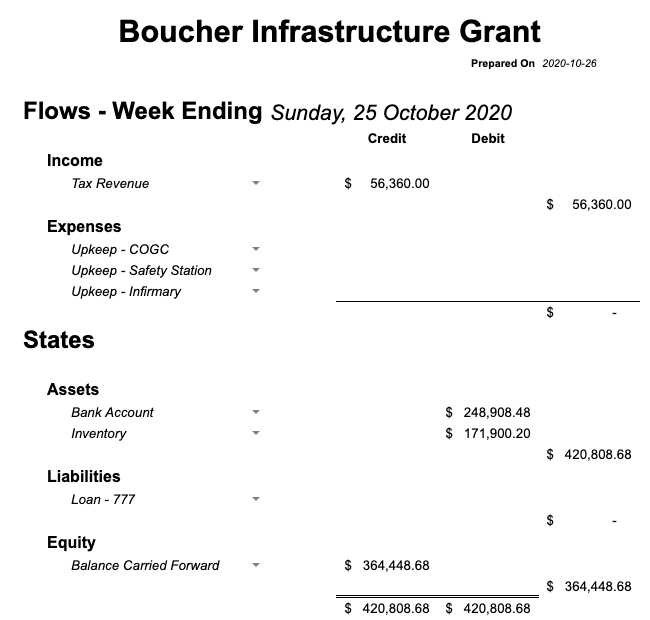 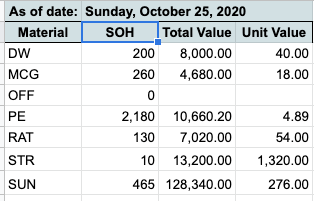 Our strategy of filling no POPI upkeep is continuing as planned:

Tech+ employers are going to start feeling the bite next week, though. My door is open to proposals on how they might save them. Until then, the official stance is the government is not supporting higher than Settlers.

I am going to reduce the frequency of these reports to biweekly, unless there is something especially noteworthy. The last two weeks were more of the same: 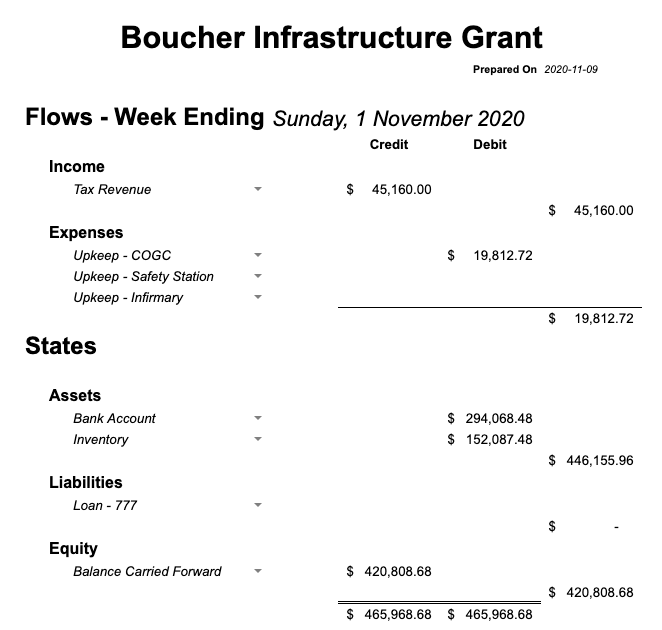 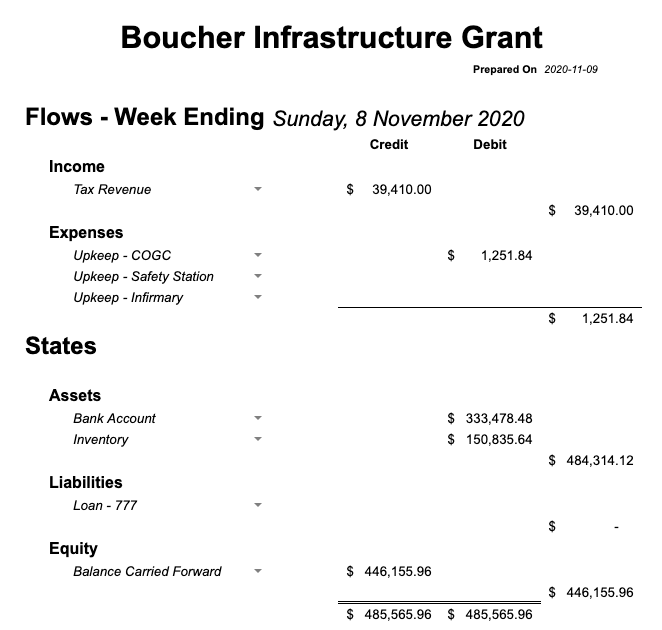 Big thank you to @the3krack3n, once again, for fulfilling most of the CoGC this past week. That explains the large difference in expenses between the weeks.

Taxes are still too high, though. In an ideal world, the only tax I’d collect would be a small Agriculture tax, to fund the CoGC since that is the industry directly benefiting. However, the WAR & LM fees comprise a significant portion of the tax revenue.

For example, the WAR is set at 800/week now, and there are 40 units rented. That’s 32k of the ~40k weekly revenue right there. However, the purpose of the WAR fee is not to raise revenue, but to inhibit wasteful camping of WAR units – essentially, encourage people to only rent a unit when its really worth it to them.

Let’s see if we can cut the WAR rate and not have all 50 get rented out immediately. I will also trim the LM fees even further, and remove all production fees except a fee of 1 on agriculture.
If we find problematic behavior follows, we can always revert.

Our POPR continue to look the same. By now, the 4 week window is completely zero POPI fulfillment, so this should be the steady need fulfillment. And… we look fine. When (if?) Unemployment for Pioneers or Settlers gets down below 20%, we will reassess.

I also set all POPI buildings’ targets to Max, which just allows any private Boucharians to contribute to the POPI should they have interest in doing so. I don’t recommend it tho; talk to me if you’d like to start a POPI fulfillment campaign and maybe we can develop it together.