The 2022.02 maintenance release will be released on Tuesday, March 29th.

We want to release a smaller maintenance and bug fix release in March. We’ll add more items to the list as we go and will let you know the release date as soon as possible.

The FLT command and ship inventories now feature an “unload” button that will transfer all items from the ship to a base storage (or warehouse if there is no base) in one click.

For PRO users, there’s also a handy new “Unload on arrival” setting when sending a ship on a mission.

The new NOTIG command lets you disable in-game notifications by type, so that they’re filtered out from the NOTS list. No more production notification spam!

For PRO users, there is a new CXM command that will allow you to compare CX information on a specific commodity across all commodity exchanges. The command optionally takes a planet as a second parameter and shows you the distance between that planet and each exchange. 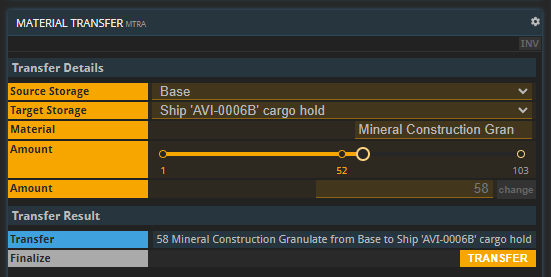 Using the new MTRA command, you can transfer specific amounts of a material between inventories. This also means the game is playable without using drag-and-drop now. However, you can also quickly access the command with pre-filled details by dragging a material to the new “AMT” field of a storage.

Think a lot of players will be happy. NagNag should decrease.

I hate to suggest this since it will reduce my income, but you should also reduce the SRD MM price if you’re lowering UTS, since that’s just a basic drone + 2 UTS.

We just deployed the changes of this update to the test server. Please give it a go and let us know if something doesn’t work as expected!

With the coming changes to notifications, and the ability to disable production notifications… I don’t know how many IOPS to the database production orders cause relative to the entire game. It’s probably a lot, and I would expect this number to go up potentially by as much as an order of magnitude.

Most people run huge production orders to cut down on notifications. I personally commonly target an overall time in the 2-4 day range, with quantities of 5-20x. But - now that we’ll be able to disable them, I expect most people will revert to small production runs. This means a TON more writes to the database compared to what we’re seeing now. I personally plan on running minimum production order sizes to make my logistics more consistent.

I guess… just make sure to take into account the performance implications on the database server. It’s probably going to be significant.

Maybe also reduce the MM price on EDC? With the current vast supply of engineers in the population of many planets. Running EDC allows for huge profits out of thin air (expect ENGI consumables).

Release time! We will start the release in a few minutes at 7:00 UTC.

The update is live. Please let us know if you run into issues!

The auto unload function is amazeballs! (I keep picturing my filthy pioneers getting nose and fingerprints on the portholes of my docked ship, staring at the resources they need to get their factory fires lit…and waiting for hours before someone opens the ƒ®¡¢k¡ng door!

Additional thought – can it be a feature that can be turned on in-flight, say next to the “ABORT” button? (But not TOO close to it…)