The 2021.3 release will be released on Wednesday June 23rd 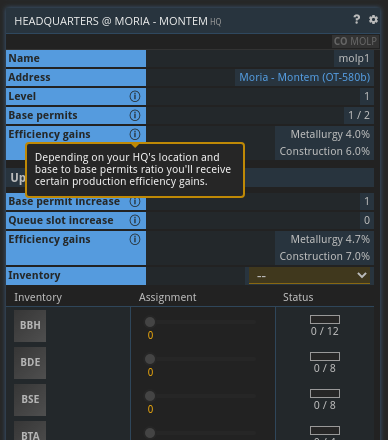 The production modifiers granted by the company HQ now have a component that depends on the ratio of used base permits to available base permits. The smaller the ratio, the higher the additional bonus.

Can you tell us what the the recipes will be for NAB and SF?

What about base time for the recipies?

Will you be able to see the bonus that you would get, if HQ is relocated (possibly at the end of the HQ buffer)?

Besides the changes stated above the patch also removed the Market Makers for S and MG. They should have been removed with the Early Access release, but haven’t. Here is my explanation from Discord:

So, with Counterpoint’s help I was able to figure out what happened. In our world editor we have two settings: one to mark a material as system supplied (aka the -flag) and the buy and sell price if it is supplied. Due to an error I made, the world editor exported the MM-flag even when it was not marked as system-supplied but just had the buy/sell prices set. I noticed that when removing the SP MM and fixed the behavior to not export a MM when the system-supplied flag is not set.
So we thought we removed the MG and S MMs with the EA release when we un-ticked the system-supplied flag, but we really didn’t and forgot to check
Since there are MMs for MGS and SCR we will not add the MMs for MG and S. You’ll find that the prices are comparable, so the impact is rather low.

What about AR? Same reason?

Any reason DW/RAT got a backslash but HE didn’t?

why are you guys killing RAT prices ?? its killing me…

With the removal of RAT and DW market maker buys and sells, we will experience an immediate, harsh shift in the market. I would like to ask the devs if they would be willing to share the thought processes behind the change. Why remove RAT but not NV1? Why remove DW but not HE? Why remove AR at all? Why was AR there to begin with?

I think this would help us understand the direction the game is going in and I think a lot of people would appreciate that.

Removing the MM Sell orders for DW and Rat has the potential to be very harmful. If someone has enough currency they can buy out the entire market (this happened many times last universe) and now they can charge whatever they want for consumables. For players who do not have their own supply they will be forced to pay whatever price is being charged. It’s not a matter of if this will happen, but when.

These MM changes also came out of nowhere - was it not possible to tell us a month in advance which MMs were leaving so people would have time to prepare and make the appropriate shifts in their strategy?

Especially true for the poor companies with ships full of S whose entire income stream vanished overnight with no warning, leaving them in a situation where they have no options but to start tearing down their base immediately.

Another point I’d just like to briefly bring up is player happiness/fun. Some players love the thrill of having no safety nets and a completely player-driven economy. Other players get more enjoyment out of having some security and stability, and their enjoyment of the game is going to go down when that stability is replaced with constant worry.

Especially with no other means of currency generation.

I also feel like those MM changes came way too sudden.

It might have been better to just decrease the MM price by some small amount each week in order to just fade them slowly out of existence instead – that’d allow players to adjust. Especially since it still isn’t possible to get rid of unwanted/unneeded bases yet.

It also feels a bit random to me that the AR MM was cut while the one for HE still exists, still wildly profitable. More so than AR probably.

I just want to make the point that not all players are in uproar over the MM removals. I for one am fine with them. The MM prices are obviously a crutch for situations where player activity hasn’t developed enough. They are there to ensure that any starting package on any planet is viable, in the sense that you won’t ever be stuck producing something you can’t sell, or be unable to buy crucial supplies (e.g. fuel).

In an ideal universe, there wouldn’t be any MMs at all, because player production would be adequate. I support the devs in moving towards that universe. As for not giving any warning about it, that was the right call, since it stopped people from gaming the market leading up to the change.

AR - no beginners start out mining AR, so no MM is required. Plus who was ever selling AR to the MM? It’s very much needed for INS, which everyone wants.

There is T1 AR planet with a few ppl on it, it’s also been constanly dumped on MM 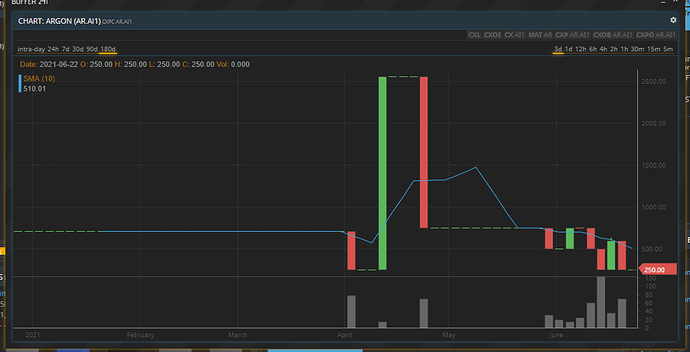 image1020×521 26.3 KB
. This is 100% problematic as it removes a huge sink for INS and will be something that could keep prices of GG gases reasonably high.

HE - a beginner might start out mining HE, on Prism, so the MM is still needed here, hence it stays.

HE MM is actually very problematic. You get 12 HE/day out of prism for only a few units of BSE (1344 currency dumped to MM per day per 16 BSE, its actually a better ROI than doing 2/3rd of the stuff ingame atm)

With this post I want to address the recent market maker changes, our motivation behind it, the turmoil afterwards and your critique of the changes.

First of all, I want to thank everybody who raised their voices, your feedback was insightful and is most welcomed.

With the Early Access release at the beginning of the year we introduced two new resources (SCR and MGS) that replaced the current resources MG and S. MGS and SCR received their own market makers, just as MG and S had before. We then removed the “system-supplied” flag from MG and S to effectively remove their market makers. Due to a bug in the world editor the market makers have not been removed and this has gone unnoticed by the dev team. At this point we owe the first apology: we should have noticed it and reacted much earlier!

The bug has been fixed with the latest release and the market makers for MG and S have been removed. This hit some players hard, as they have bases that specialize in producing MG and S primarily for the market makers.

We still think that the market makers for MG and S should be removed, as we have MMs for SCR and MGS. In order to make it easier for players to pivot, we will re-instantiate the MMs and remove them over the course of the next weeks.

Here is how we intend to do that:

The same bug struck the market maker for AR. Our logs indicate that the MM has had almost no movement in the past and just recently saw some orders. We will keep it, for now, on a much lower level to compensate for overproduction when extracting AR to produce INS.

About two or three weeks ago, when planning and implementing the 2021.3 release, we had a look at the market maker statistics for RAT and DW. Back then their balance only changed marginally, the supply and demand was high and the markets looked healthy. We decided that we wanted to remove the MMs, we thought that removing them would not make a big difference after all. That way we would have two MMs less and less MMs is a good thing in our opinion. We would also have gained insights in how a market would shift if the MMs are gone.

I removed the MMs from the world editor right before the release and didn’t have a look into the statistics again. In the last two weeks the two MMs, especially RAT, pumped a lot of money in the economy and gained a lot of traction. The only conclusion is that lots of players are producing with the goal of selling to the MM.

In general that is not a bad thing todo. Until we have a more controlled way to inject money into the economy it is the only way (besides new players) to do so. At the same time producing with the goal to sell to the MMs is dangerous. We can and will change MMs.

Still, I owe an apology here. I should have looked at the statistics again, before implementing the change. Not doing so upset a lot of players and I am sorry!

So, Counterpoint and I decided that we will re-instate the two MMs, albeit with adjusted values.

The market maker for HE has been flying under our radar until now. During the whole discussion yesterday many players mentioned that it would be unfair to remove or adjust some of the major MMs while leaving HE untouched.

So we will reduce the MM by around a third.

Tbh, this should be done first. Same result but without stressed people.