Now that the contest has begun in full swing and the other CX contenders have stepped up their game(with more detailed posts about what they are doing), here is a dedicated thread as the other thread was getting messy.

In this devlog we have trolling, and planet updates.

The Arclight project is getting popular, popular enough for Rwinner16 to troll the CX project by subverting the naming contest and using his supporter perks to name HM-049b Poseidon and also name the system Mount Olympus.

This is no small feat as the two perks cost 299 EUR and 169 EUR respectively, and Rwinner16 is a Universe level supporter. While it is flattering that Real-life money was thrown at the contest, I am saddened by the contest being subvert, and the loss of the work that went into some of the names chosen for HM-049b.

With POPI stabilized for this week the population is rapidly growing, to the point that a second SST will be needed as two more project members drop bases down on Ementior. The Warehouse is complete so people can start posting orders.

This planet is reaching starter-planet populations.

image878×436 41 KB
This planet has seen incredible growth lead by project supporters. Basic pioneer infrastructure, Local Market and Warehouse have been completed. The population could reach over 7500 pioneers quickly.

The Local market is seeing demand for smelted AL, and L-fabs, as well as selling carbon. 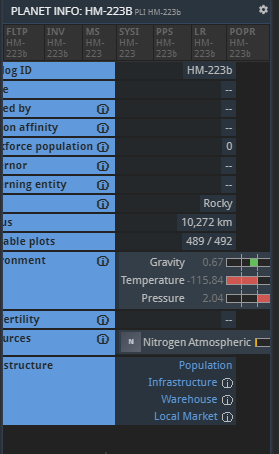 Gateway B, is a fuel-resource drop off point as this planet is 12 hrs from any of the focus planets while being 24hrs away from Benten. Gravy is running point on this project if you want to ask him questions. 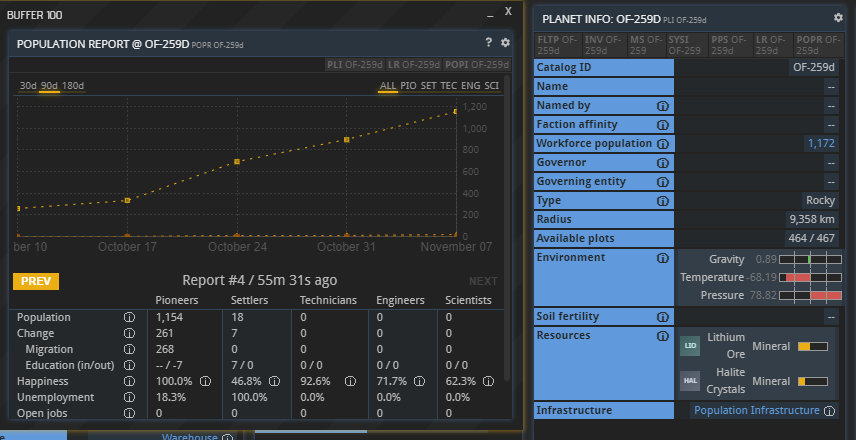 Has reached official focus planet status with over 1000 population. As LI when smelted is pretty light for a metal, this is a key planet in the Arclight sector, as the LI/HAL combination is rare. The excess HAL has also allowed Benten CX to gain access to HAL on the open market.

In this devlog I’d like to highlight interesting planets. 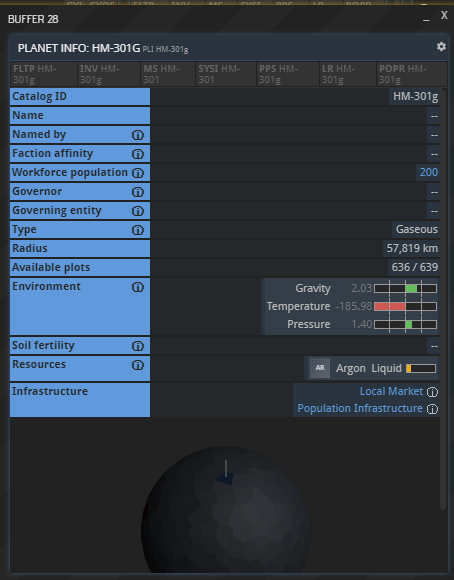 Settled by Fuurin[FOWL] this planet will offer AR and allow cheap INS to enter the Ementior region only to encourage development in this region, as a fair bit of planets require INS. 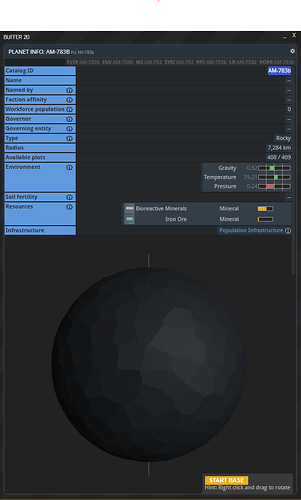 A planet in the same system as Ementior, this planet only requires SEA to settle and is one of the top BRM planets in the universe(only .5/day from the top planet). With POPI and electronic MMs becoming more important every day, this is a really important planet in the galaxy, as BRM is needed in large quantities.

CLI would need to be imported, however CLI is used in less quantities then BRM(20 BRM to 10 CLI)

Ementior continues to grow rapidly, with more project members dropping full bases down. In fact, Ementior has grown so much, that it will require a second SST. However first a ADM will be required as the current infrastructure + a second SST will be hard to maintain without a ADM.

image1493×687 62.5 KB
ADM and COGC progress is being made steadily now that heavy L-fab production has started.

Due to base density, I’m able to buy whatever I need off the Local Market-a sign of a healthy economy. The economy has become robust enough to support specialized SME bases to fuel the L-fab industry. There is also demand for specialized ALO bases as well.

SST has been put in, allowing further growth. Due to settler demand a INF might be built in the future. Black Suns has put down a Glass Furnace and is selling glass at better then CX prices.

Corrim has built a SST, which will allow further growth when needed. HAL is also making its way back to the Benten CX, spurring a Chemistry sector growth in the Benten sector.

Pacoo Mining Corp unaffiliated with the Arclight project arrived ahead of schedule to AM-783b, making the planet a new focus planet for the purposes of the Arclight project, as a second company, Termitaci
arrives as well, with a third from Nemesis( Haestrom) arriving any day. Not much is known about the two companies, which is drawing attention to the planet from all over the universe.

The planet AM-783b wasn’t included in the initial focus planets because, I didn’t think the area would be developed fast enough to get a specialized chemical planet in the area. 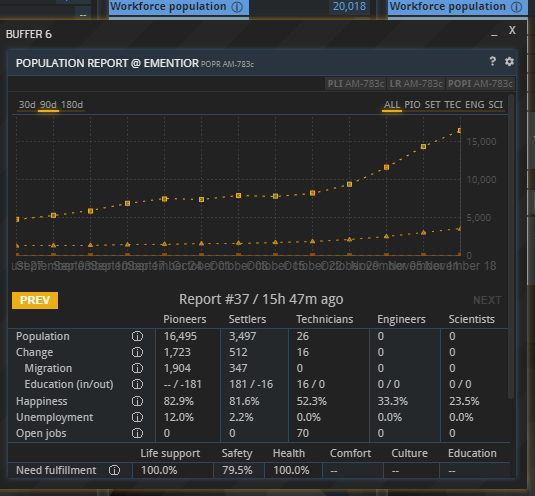 Of course that means the single SST maintaining the Safety of the planet isn’t enough anymore.

However the priority now is that the ADM get built so the second SST can be maintained. 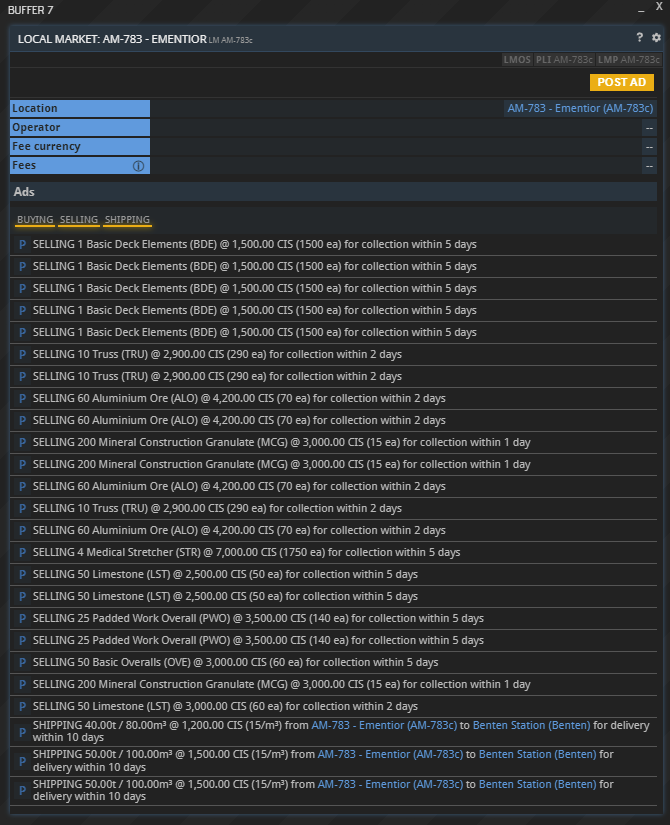 Ementior’s Local market is now a hot place now that the PP2s are firing on all cylinders, and there is now a good amount of tech demand as well with 70 open jobs for technicians. 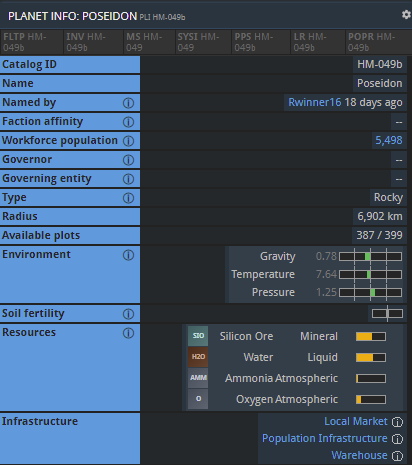 Poseidon has seen really good growth thanks to the players who have settled on the planet. Much more then I though possible. Initially at the start of the project I was hoping for a little over 1000 population, but now with a SST online it seems like Poseidon will be a economic heavyweight in the Arclight sector.

With three players arriving on AM-783, it looks like the planet will be a central planet in the Arclight sector. Already there are 400+open settler jobs which, if filled would push the planet over 1000 population already. 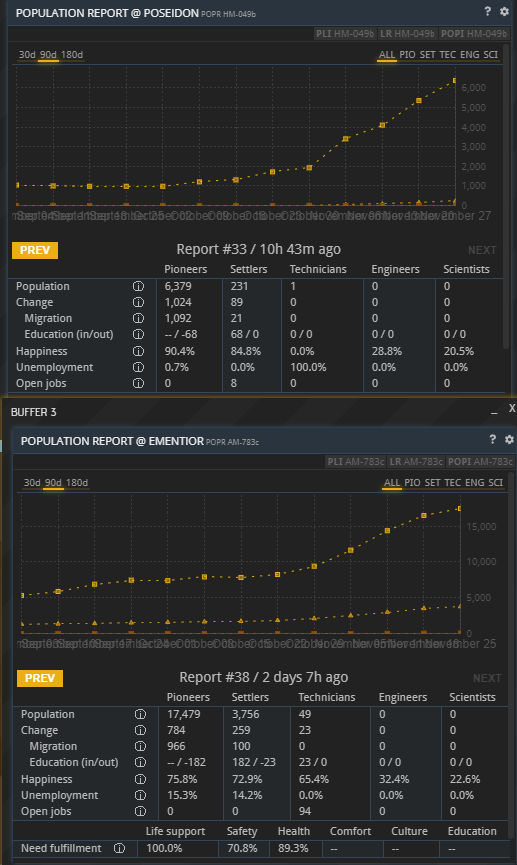 Technicians are also growing as fast as technicians will grow on Ementior-a PAR will need to be built in the future for more technician growth.

Arclight functioning government established on Ementior with the completion of the ADM. This will make it easier to expand and maintain the current government infrastructure.

With that done it’s time for a poll on the tax rate on Ementior.

With the ADM completed, I was elected governor, being the only one who ran for governor, which definitely increase my responsibilities as now I have to handle other people’s money.

POPI on Ementior has remained stagnant except for the settler and technician sector due to Safety being a concern. I’ve bought the remaining BDE for the second SST, so hopefully the population situation will stabilize. I’ve also put in a order for some more STR to fix the Heath of the population.

AM-783b has reached the 1000 pop threshold to become a focus planet, which is good as Ementior and other planets will need the BRM to build a PAR in the future.